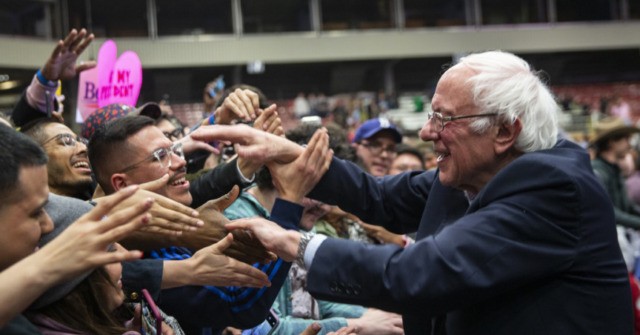 Supporters of Sen. Bernie Sanders (I-VT) will not commit to supporting Michael Bloomberg (D) if he becomes the Democrat Party nominee, and one supporter warns that voter turnout will suffer if the Democrat Party stiff-arms Sanders in the event of a brokered convention.

Two Nevada caucus-goers, who participated in Saturday’s Democrat caucus at the Wynn Resort in Las Vegas in support of Sanders, spoke to Breitbart News about the chances of their candidate failing to seal the nomination. Neither of them would commit to supporting someone like Michael Bloomberg (D).

“I would not be willing to vote for Bloomberg if he gets the nomination,” Jennifer Vattisti said, continuing, “I wouldn’t settle.”

“I’m not interested in settling for a candidate I don’t believe in,” she added.

Another Sanders supporter, Habtamu Seme, told Breitbart News that he did not think he would support someone like Bloomberg:

Justin Goldberg, an out-of-state Sanders supporter, told Breitbart News that voter turnout could suffer if the Democrat establishment chooses another candidate — like Bloomberg or Biden — in the event of a brokered convention:

If the Democrat Party establishment chooses somebody like Mike Bloomberg or Joe Biden even though the momentum was behind Bernie Sanders — like I said I would vote for the nominee, but it would be very tense and I think that it would reduce voter turnout overall if the Democratic Party handpicks a candidate that the people did not vote for by popular vote.

With three percent of precincts reporting, Sanders is leading in Nevada with 54.5 percent of the vote. The Fox News Decision Desk has called the race for Sanders.