A single-engine plane crashed shortly after takeoff from a Hawaii airport Saturday morning, landing upside-down on nearby U.S. Army property, killing both people onboard.

One man, who was in his 60s, was pronounced dead at the scene, an Emergency Medical Services spokeswoman told Hawaii News Now. The second onboard, a 78-year-old man, was rushed to the hospital, where he later died of his injuries. Authorities have yet to identify the victims.

THESE ARE FIVE OF THE DEADLIEST U.S. PLANE DISASTERS

“I’m deeply saddened to hear the news of two people losing their lives in today’s crash. My heart goes out to the family and friends of the victims,” Honolulu Mayor Kirk Caldwell tweeted. “Thank you to all the first responders on scene today. We are working with ME’s office to make sure family members are notified.”

Last June, 11 people who had set off on a skydiving expedition were killed when a Beechcraft BE65 twin-engine plane went down shortly after takeoff from Dillingham Airfield.

In light of the second tragedy at the airfield in nine months, U.S. Sen. Brian Schatz, D-Hawaii, called for its permanent closure, Hawaii News Now reported. Despite signing a five-year lease with the U.S. Army, Hawaii DOT announced earlier this month it’s cutting its contract about three and a half years short. The state is transferring Dillingham Airfield back to the Army effective July 1.

“It has become clear that Dillingham Airfield cannot continue to operate safely,” Schatz said in a statement. “Our obligation is to keep people safe, and the only way to do that is to keep the airfield closed. I urge the FAA and HDOT (Hawaii Department of Transportation) to shut down the airfield until they can guarantee safety of operations at Dillingham.” 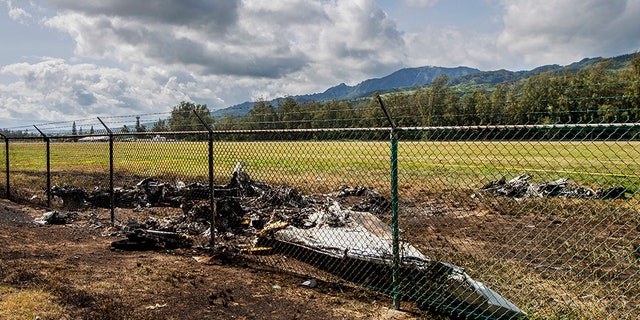 This is the site at Dillingham Airfield in Mokuleia, Hawaii, where a Beechcraft King Air twin-engine plane crashed Friday, killing 11. (AP/Honolulu Star-Advertiser)

“While it will probably be more than a year until officials are able to determine the cause of this crash, the Federal Aviation Administration cannot treat this as an isolated incident as it did with the previous three, but must immediately ask itself the hard question it has thus far avoided of whether existing tour helicopter/small aircraft regulations are simply inadequate to protect the safety of those in the aircraft and of the over 1 million of us that they fly over every day,” Case said in a statement.

But state Rep. Sen. Gil Riviere, who serves the area, said calling for the airfield’s closure so close to the deaths of the two pilots was an “insensitive” move.

“These men absolutely loved to fly at Dillingham Airfield, so a call to shut down the airport within hours of their loss is truly insensitive and misinformed,” he said.

Hawaii DOT tweeted the plane’s tail number, N65070, following Saturday’s crash. It showed the plane was owned by Honolulu Soaring, a company that offers scenic glider tours. The aircraft involved in the crash was a tow plane, used to pull gliders over the ridge.

But there was no glider attached to the plane at the time of Saturday’s crash. The two men aboard had taken off for pilot training, according to North Shore Aviation Services, the aircraft owners and pilots association for Dillingham Airfield.