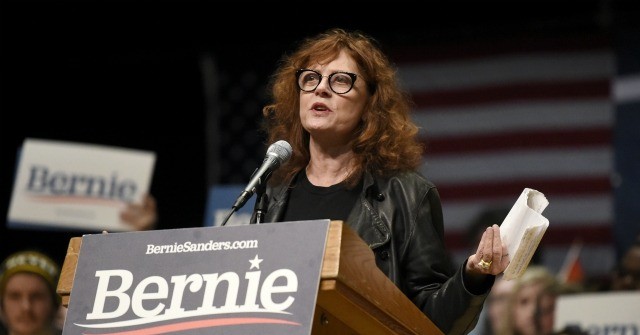 Left-wing activist and actress Susan Sarandon posted a video to Twitter to let fans know she was headed to the Palmetto State to stump for Bernie Sanders in Charleston.

“OK, guys, I’m on the road again for Bernie. On my way to Charleston, South Carolina. Loved it that last time I was there,” the Thelma & Louise star said as she rode in the back of a car. “It’s happening, guys, it’s happening.”

Susan Sarandon was deeply involved in the 2016 election, but this time, along with supporting Sanders, Sarandon is also calling for the ouster of Democrat Speaker of the House Nancy Pelosi should Sanders win the White House.

“We’re not looking to keep Pelosi because there’s a progressive running against her who supports Medicare for All and the Green New Deal, among other things,” Sarandon tweeted on Saturday.

We’re not looking to keep Pelosi because there’s a progressive running against her who supports Medicare for All and the Green New Deal among other things. Check out @ShahidForChange at https://t.co/g293QvlKFB and vote by March 3rd. https://t.co/6G8MWfUzIP

Sarandon is no newcomer to left-wing political activism. The Bad Moms Christmas star made waves in 2016 for refusing to support Hillary Clinton because the former secretary of state was not far enough to the left.

Sarandon is not the only member of the Hollywood left hitting the campaign trail for a Democrat this primary season. Grammy-winner John Legend is also headed to South Carolina to try and help anti-capitalist Massachusetts Sen. Elizabeth Warren get out the vote.

The All of Me singer endorsed Warren in October, telling Vanity Fair that Warren is “the best candidate running today and she comes at it with joy and with sincerity and with a wealth of knowledge and experience.”