Police in California have launched an investigation into why a man drove his Jeep off the roof of a six-level parking garage and into a McDonald’s across the street, a published report Sunday said.

Shortly after midnight Sunday local time, police reported finding a newer-model Jeep against a building, a news release from the Santa Monica Police Department said. The city’s fire department said it received information the Jeep had been driven off the top of a nearby parking garage, USA Today reported.

The Jeep’s sole occupant was a 20-year-old male driver who was conscious and speaking with police, the newspaper reported. He was not identified.

The Jeep occupant was freed from the vehicle by the fire department and taken to a local hospital, where he was listed in critical condition, the report said. Later Sunday, the occupant’s condition was upgraded to stable, police reported. 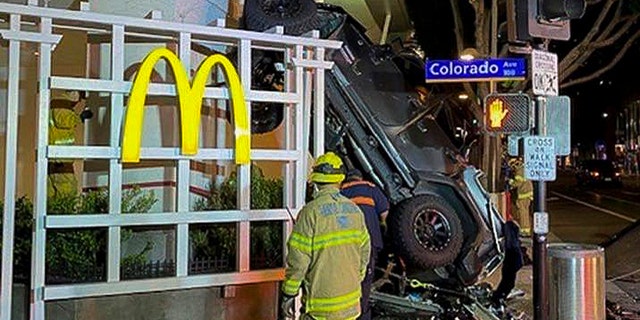 Prior to the incident, there were two others in the vehicle. Both passengers reportedly jumped out before it was driven off the top of the garage, according to the fire department.

Both the the building and parking garage sustained significant damage, the fire department said.

Police obtained a warrant to retrieve the driver’s blood and determine if drugs or alcohol played a role in the incident, USA Today reported.

The Santa Monica Police Department did not respond an emailed request for further comment from USA TODAY on Sunday evening.