Joey Logano made it two for two at Las Vegas Motor Speedway on Sunday, winning the track’s February South Point 400 event for the second year in a row. 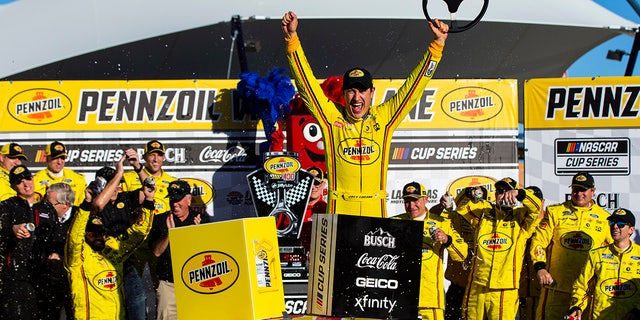 The Team Penske driver held off Matt DiBenedetto during a two-lap green/white/checker finish that ended under caution when several cars wrecked behind the leaders after Logano passed by the white flag.

The win came after Logano missed a call to the pits for a tire change with six laps remaining and had to stay in front of a pack of contenders on fresh rubber.

“Clean air was going to be key with old tires,” Logano said. “If I got swallowed up by a couple cars, I was just going to fall backwards really quick.”

JOEY LOGANO MADE A SURPRISING DISCOVERY AT THE WHITE HOUSE

DiBenedetto’s second-place finish was his best ever, and it came in just his second race for Wood Brothers Racing.

“This is all just too surreal,” he said. “Tough to be that close, but, hey, this is only the second race of the season. So it was the strength of this team. It’s so cool to have the backing of all the people that allow me to drive this thing.”

Daytona 500 pole-sitter Ricky Stenhouse Jr. rounded out the top three in the first race since Ryan Newman’s dramatic wreck at the end of the Florida race.

Newman’s absence marked the end of his streak of 649 races in the Cup Series dating back to 2002. Newman’s team, Roush Fenway Racing, revealed prior to the Las Vegas Race that he had suffered brain injuries in the crash, but didn’t offer a timeframe for when he would be back behind the wheel.

Ross Chastain was in Newman’s No. 6 Ford in Las Vegas, finishing a disappointing 29th.

“I was just overdriving there at the end for sure. It just got away from me there and got loose,” Chastain said. “The car deserved a lot better finish.”