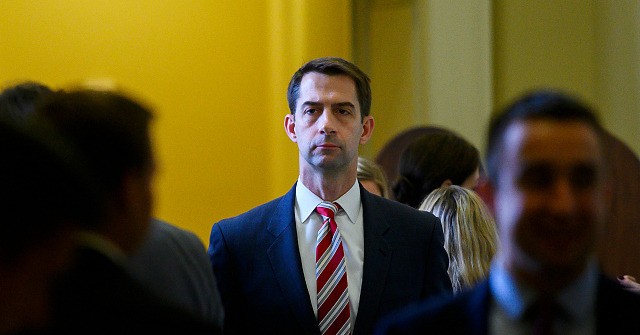 Sen. Tom Cotton (R-AR) told Breitbart News that all his conversations with President Donald Trump over the past month have involved the coronavirus, offering his remarks on Breitbart News Sunday in an interview with special guest host Joel Pollak.

“I can tell you the president is very much on top of the threat that we face from coronavirus,” stated Cotton. “In fact, probably every conversation I’ve had with him for the last month has involved, at least in part, coronavirus.”

Cotton noted Trump’s decision to block foreign nationals who had recently been in China from entering the U.S., contrasting the president’s decision with Barack Obama’s unwillingness to do the same in 2014 during an Ebola outbreak in West Africa.

“In mid-January, I urged the administration to stop travel from China,” recalled Cotton, “and the president very boldly and decisively shut down that travel. That was a big decision. That was the decision President Obama was not willing to make about the Ebola crisis in 2014.”

Trump “is engaged” and “directing a very aggressive effort to prevent any further outbreaks,” determined Cotton, adding, “Ultimately, the most important thing is the health, safety, and security of the American people.”

Pollak asked about possible economic consequences related to the coronavirus impacting the production of goods and exports from China.

Cotton replied, “If there are any economic effects, China will be 100 percent to blame for those effects because they have been so dishonest and corrupt and deceitful from the very beginning. … I’m confident that the American worker, American farmer, the American rancher can fight through it.”

The size of China’s economy and its relative impact on global commerce is the primary source of economic concern for America given the coronavirus impact, determined Cotton.

“Wasn’t that remarkable that in that entire debate, [Democrats] didn’t talk at all about the safety and security of this country, the kind of military we need, the kind of strategy we need offset a long-term adversary like China?” asked Cotton. “How about the fact that they didn’t even discuss a virus that could emerge as a global pandemic? This is in keeping with what the Democratic Party has done for a year. They’ve been so obsessed with their own fascinations, their own obsessions in Washington, DC, — just look at the impeachment trial we went through — that they are not speaking to normal voters’ concerns, concerns about their health when it comes to coronavirus or their safety and security when it comes to our military or China or Iran.”

Cotton added, “Look at the changes [Donald Trump] has brought about in our China policy. For 20 or more years, leaders in both parties regrettably didn’t take the China threat seriously, and Donald Trump has completely remade American China policy.”

Cotton concluded, “But I thought it was very telling that the Democrats didn’t discuss either foreign policy or coronavirus in their debate last week.”