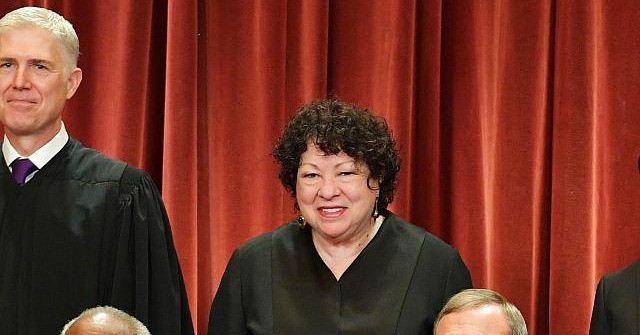 Sotomayor dissented in the Supreme court’s 5-4 decision in Wolf v. Cook County, upholding the federal government’s authority to restrict immigration from foreigners who would become financial burdens on taxpayers as “public charges.”

“I fear that this disparity in treatment erodes the fair and balanced decisionmaking process that this Court must strive to protect,” wrote Sotomayor, who was appointed by Barack Obama, adding, “They upend the normal appellate process, putting a thumb on the scale in favor of the party that won a stay.”

Sotomayor declared, “It is hard to say what is more troubling: that the Government would seek this extraordinary relief seemingly as a matter of course, or that the Court would grant it.”

Cotton said, “I’ve read [Sonia Sotomayor’s] dissent, and this is a classic example of the president’s critics and opponents projecting onto him exactly what they and the other critics are doing.”

“So [Sonia Sotomayor] accused the Republican-appointed justices on the Supreme Court of taking extraordinary steps to side with the administration and allow them to implement their agenda when, in fact, it is all of these resistance judges appointed by Barack Obama or Bill Clinton or even Jimmy Carter who are issuing these crazy nationwide injunctions without a factual record in front of them that are actually taking unprecedented action,” added Cotton.

“The Supreme Court is simply stepping in and saying they’ve had enough with a single judge who’s probably been shopped at for by left-wing plaintiffs shutting down what it is a basic regulation that should move forward.”

Immigration should not bring in those who will be burdens on government-driven welfare programs, said Cotton.

“On the merits of this case, the so-called ‘public charge rule,’ that immigrants should not be allowed into this country if they will become a public charge, they will use welfare or use food stamps or use Medicaid, that is probably the oldest principle of American immigration law,” determined Cotton.

Cotton continued, “You know in the 18th and 19th century, we didn’t have much in the way of immigration law, certainly not like we have now. There were very few laws at all governing immigration in those days. One of those laws, though, is that you cannot come to this country and become a burden on the public treasury.”

Cotton concluded, “I mean, that’s just plain common sense, and it’s high time that the Trump administration was allowed to implement their regulation that has been blocked by all these left-wing resistance judges.”