Turns out that Tyson Fury’s 273-pound frame wasn’t the only thing weighing down Deontay Wilder on Saturday night.

In his first interview since Saturday’s defeat at the hands of Fury, Wilder offered some interesting insight into his form walking into the ring. 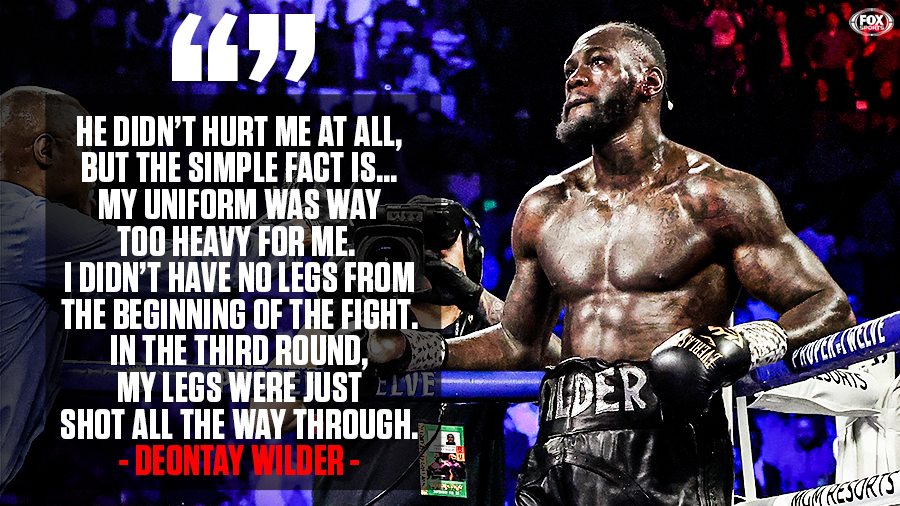 Whether or not Wilder is making an excuse is up for debate.

My story on @BronzeBomber‘s comments about his loss to @Tyson_Fury has now been fully updated https://t.co/vAmw4FUY2O

That thing did look heavy.

At the same time, what is 40 pounds to a 231-pound heavyweight champion?

Regardless, all indications on Monday are that Wilder had more going on coming into Saturday than just the fight, and that might have doomed him before the first bell.

Today’s #Whitlogue: We’ve got to give it to Fury. He knew exactly where he would end up: on top. @WhitlockJason pic.twitter.com/mZaZC56tnT

Sure, boxers always call their shot. Fury’s prediction of a KO was in no way unique.

But what was unique is that Fury not only called his shot…he called his gameplan.

“They all say Fury will win on points, or this man by knockout. I don’t want that cliché. Clichés I don’t do. I want to be different.”@Tyson_Fury explains why he’s so determined to get the knockout against @BronzeBomber. 🥊 #WilderFury2 pic.twitter.com/lT2qWj4hJE

Before the fight, Fury vowed to go straight at Wilder in an effort to eliminate any questions that exist about his punching ability.

Fury said he was going to attack Wilder, box inside, lean on him, keep him from being able to extend and fire his lethal right. And he did exactly that. Wilder looked baffled from the start. No one single punch seemed to rock him. Just the onslaught and 273-pound tonnage.

Clearly, he accomplished that.

But now another question exists…how come Deontay wasn’t ready for it?

“Wilder’s got that one lethal weapon. I thought is there any way he’s going to land one punch and get back in this fight?”@RealSkipBayless doesn’t agree with @BronzeBomber‘s corner’s decision to throw in the towel #WilderFury2 pic.twitter.com/9tJ0mJeG6u

He relies on it so much, and it has proved to be so lethal, that our Skip Bayless believed he still had a chance to win on Saturday, despite the way the first six rounds had transpired.

As lost and battered as Wilder looked, I still say … the towel should not have been thrown in. Not quite yet. His M.O. is throwing lethal rights out of nowhere. He deserved the rest of the round to try to land just one on a Fury who’s capable of getting overconfident.

I have little doubt Fury was going to win this fight, but wish Wilder’s corner hadn’t thrown in the towel. Remember how Fury rose from the canvas in R12 of the first fight. Obviously, he wasn’t hurt as badly as Wilder was this time. But … he deserved the rest of the round.

Wilder didn’t get to finish that round, and most thought his corner made the right decision.

Trainer Mark Breland cared more about Deontay Wilder the person, then he did Deontay Wilder the bussiness. He showed compassion. He is also the most qualified person in that corner to make that decision. He’s been there and done that. What’s popular is not always what’s right.

However, much to his dismay, Wilder didn’t get to finish the round.

“Mark [Breland] threw the towel. I didn’t think he should’ve. Deontay’s the type of guy that goes out on his shield.”

Jay Deas, the @BronzeBomber‘s longtime trainer, disagreed with his own corner’s decision to stop the fight in Round 7. #WilderFury2 pic.twitter.com/nWrn0vX1YY

And it appears he plans to part ways with Mark Breland after Saturday’s result.

Also told by @BronzeBomber that he is re-evaluating retaining asst. trainer Mark Breland, because his team knew “I’d rather die in the ring than have the towel thrown in. I’m a warrior.” Full story coming to @TheAthleticBOX shortly.

But was the loss really on Breland, or did it come down to Wilder’s preparation?

How could a boxer and his trainer view a situation so incredibly differently? Had they never spoken about this?

Or, did Wilder potentially return to the ring too quickly?

“What I didn’t like was the fact that he had both fights so close. He [Deontay Wilder] just fought Ortiz in November. As a fighter, these 8-9 weeks of training camp are grueling. He didn’t have a great chance to recover.” — @AndreBerto pic.twitter.com/NM9tXJlQJZ

Give credit to Fury, who once again, spoke his gameplan into existence and then executed.

“I’m shocked with how easy @Tyson_Fury made it look.”@ShannonSharpe reacts to Fury’s TKO win against Deontay Wilder pic.twitter.com/hFBVpUzCcy

Saturday night couldn’t have gone any better for the Gypsy King.

But after the initial two rounds, and specifically after the first knockdown in the 3rd round, Wilder never seemed like he was in the fight.

“I haven’t been more shocked by the way a heavyweight fight unfolded since Ali rope-a-doped George Foreman in the Rumble in the Jungle.”

Keep in mind, Wilder was undefeated and represented the sport’s most devastating knockout artist as of Saturday evening.

“I don’t think it’s the best idea from a competitive point of view for Deontay, I think he’ll lose again.”@ShowtimeShawnP, @maxkellerman and @Timbradleyjr on if the @BronzeBomber should fight @Tyson_Fury for a third time. #WilderFury2 pic.twitter.com/HJOrn2oD4u

Wilder seems to be poised to get in the ring with Fury again. And who knows, maybe it will be the same result.

“-335 is too heavy. You never know what these guys are going to do. Wilder has a puncher’s chance. Get Wilder to that rematch and I’ll take him if he’s still at +250.” — @TheCousinSal #WilderFury2 pic.twitter.com/uj7z1aIPGE

And maybe, with the roles reversed, Wilder can pull off the massive upset.