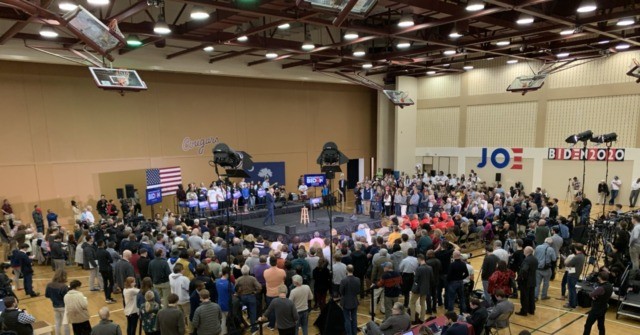 The rally was intended to show support ahead of Tuesday night’s Democrat debate, and Saturday’s Democratic caucuses. Biden has seen the Palmetto State as his “firewall,” based on his support among black voters, but Sen. Bernie Sanders (I-VT) has been catching up. Only about 200 people showed up on Monday night, standing in a circle in half a gymnasium at the College of Charleston.

Biden claimed, as he has since the start of his campaign, that Trump called neo-Nazis and white supremacists who rioted in Charlottesville, Virginia, in August 2017 “very fine people.” In fact, the transcript of Trump’s remarks shows clearly that he said they should be “condemned totally.” He used the phrase “very fine people” to refer specifically to non-violent protesters, left and right, on either side of the question of whether a historic Confederate statue should be removed from a local park.

The former vice president also claimed, falsely, that the president used the phrase “very fine people” to refer to the extremists who murdered Heather Heyer, a protester against the statue and the neo-Nazis. In fact, the transcript shows, Trump specifically referred to her murder as an act of “terrorism.”

This guy is more George Wallace than he is George Washington … When in fact all those folks came out of the fields in Charlottesville, Virginia — close your eyes, and remember, friends, what you saw on that television — you saw people coming out of fields with lighted torches at night, spewing hate, antisemitic bile, accompanied by white supremacists and Ki Klux Klan, and in fact when a young woman was killed, resisting the hate, they asked the president what he thought, what did he think? He said there were, quote, “very fine people on both sides.” No president has ever done anything like that.

Breitbart News challenged Biden at the Iowa State Fair last summer over his repeated habit of misquoting Trump. Biden has persisted in using the “very fine people” hoax, regardless.

Get all the latest news on coronavirus and more delivered daily to your inbox. Sign up here. The Transportation Security Administration said Sunday that a total of  61 screening officers have tested positive for COVID-19 and posted a list of airports and shifts that they worked prior to their diagnosis. EXPERT: HOW TO PREVENT CATCHING CORONAVIRUS  […]

Get all the latest news on coronavirus and more delivered daily to your inbox. Sign up here. A field hospital is being erected in New York City’s famed Central Park to help meet the demand of extra hospital beds during the coronavirus outbreak that has ripped through the city. FDNY REPORTS FIRST CORONAVIRUS DEATH Mt. Sini […]

Get all the latest news on coronavirus and more delivered daily to your inbox.  Sign up here. President Trump called the United States’ fight against the coronavirus its “big war” — and in southern Georgia, a group of military veterans is doing its part to help communities in need during this national crisis. “They’re still coming […]

Alicia Keys dedicated her song to first responders and medical professionals keeping the nation safe. Get all the latest news on coronavirus and more delivered daily to your inbox. Sign up here. Elton John and some of his most famous friends are stuck at home, just like the rest of America during the coronavirus pandemic – […]