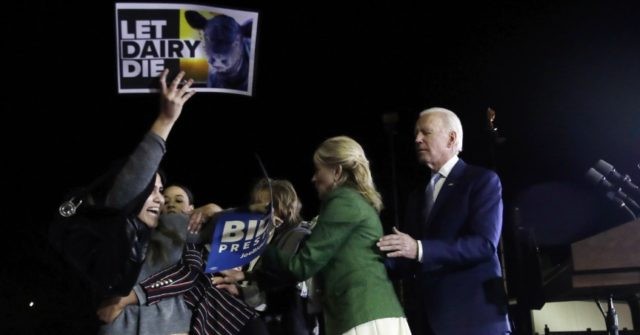 Former Vice President Joe Biden used his speech after Democrat primary wins in Florida and Illinois to try to appear presidential during the coronavirus crisis and appeal to rival Bernie Sanders voters.

After first mispronouncing and repeating “Good Evening,” Biden delivered a live-streamed speech from his home in Wilmington, Delaware, first speaking about the coronavirus epidemic.

He spoke calmly and slowly, appearing to be reading from a teleprompter or script, and compared fighting the coronavirus to “fighting a war” that is “going to require leadership.”

“This is a moment when we need our leaders to lead,” he said. He did not reference Trump during his speech, although he and his surrogates have attacked the Trump administration’s response over the last week.

“That’s who we are…ordinary people doing extraordinary things,” he said, before turning to the Democrat primaries on Tuesday in Florida, Illinois, and Arizona.

Noting that results were not in yet in Arizona, he said, “Today, it looks like once again, in Florida and Illinois…our campaign has had a good night.”

He said the campaign has built a “broad coalition” of African Americans, Latinos, high-school educated workers, and teachers.

Sanders was expected to lose in Florida, in part due to his praise for former Cuban dictator Fidel Castro and the large anti-Communist Cuban-American population in Florida.

Biden then thanked Sanders and tried to appeal to his voters.

“Let me say, especially to the young voters inspired by Sen. Sanders, ‘I hear you,’” he said. “My goal is to unify this party, and then to unify the nation.”

He then turned back to say the coronavirus doesn’t care if you’re a Democrat or a Republican, He said. “This is a moment for each of us to see and believe the best in all of us.”

At the end of his speech, Biden stood still and looked into the camera in silence as his wife, Jill Biden, walked up beside him, surprising him.

“Oh!” he exclaimed when she went to give him a hug.

He then said “thank you,” several times, followed by, “OK,” before walking off.

His campaign has been beset by both verbal gaffes and technical live-streaming difficulties, all of which were kept to a minimum in the seemingly carefully choreographed event.