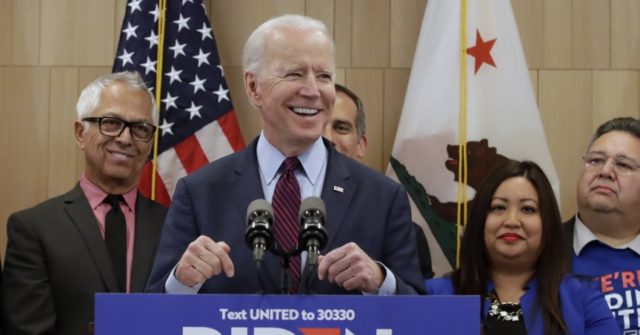 Former Vice President Joe Biden is the projected winner of the Democrat presidential primary in Florida.

Biden, who led most polls emanating out of the Sunshine State in recent weeks, was declared the winner shortly after the last ballot was cast. Although the official margin is yet to be known, Biden seems to have dispatched his main rival, Sen. Bernie Sanders (I-VT), handily.

When the race was called, with nearly 70 percent of precincts reporting, the former vice president led Sanders by more than 40 percentage points—60 percent to 22 percent. Given Biden’s expansive lead, it is likely he will capture the lion’s share of Florida’s 219 delegates.

The primary was one of the first to take place after the Coronavirus outbreak was deemed a pandemic by the World Health Organization. As such, turnout was lower than expected across Florida as at-risk populations, mostly the elderly and individuals with compromised immune systems, were advised to stay home to mitigate their risk of infection.

Many believed a dropoff among older voters, who make up a substantial part of Florida’s electorate, would impact Biden, as they constitute one of his key demographics. As evidenced by the results, that theory did not pan out. In fact, as exit polling indicates, the burgeoning pandemic may have actually helped the former vice president. According to an NBC News exit poll released Tuesday, 71 percent of Florida voters said they trusted Biden to “handle a major crisis,” while only 23 percent said the same of Sanders.

Even without the onset of the pandemic, Biden’s landslide win is not all that surprising. In recent weeks, the former vice president has led Sanders in polling among Florida Democrats since entering the race. Biden’s position was all the more strengthened after dominating wins in South Carolina and on Super Tuesday, in the aftermath of which establishment Democrats coalesced behind his candidacy.

The consolidation was nowhere stronger than in Florida, where Biden received the backing of every single Democrat in the state’s congressional delegation. Included on the list where high-profile power brokers like former Democratic National Committee chairwoman and congresswoman Debbie Wasserman Schultz.

Sanders’ standing among Florida Democrats, although never strong, was also diminished by a number of self-inflicted wounds. Most notably, the self-described Democratic Socialist angered many in the state’s Cuban community by praising the late-dictator Fidel Castro. The ill-will engendered by Sanders’ remarks was best exhibited by Rep. Debbie Mucarsel-Powell(D-FL), who represents a heavily Cuban district in southern Florida.

“I find Senator Bernie Sanders’ comments on Castro’s Cuba absolutely unacceptable,” Mucarsel-Powell said publicly at the height of the controversy. “The Castro regime murdered and jailed dissidents, and caused unspeakable harm to too many South Florida families.”