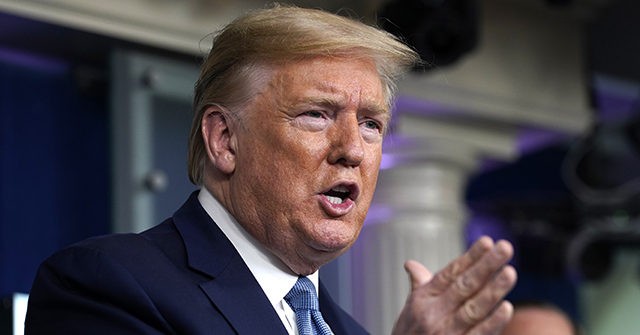 Roughly half of America approves of the job that President Donald Trump is doing to combat the coronavirus pandemic.

A new poll released by Monmouth University on Monday indicates that 50 percent of Americans across the country believe the president is doing a good job in handling the crisis, compared to 45 percent who do not. When broken down along partisan lines, Trump’s performance was rated significantly better among Republicans (89 percent) and independents (48 percent) than Democrats, only 19 percent of whom thought the president was doing a good job.

Despite the partisan divergence, Trump’s management of the crisis was viewed more than favorable than that of both congress (42 percent) and the media (45 percent). In fact, the president only trailed the nation’s governors and federal health agencies when it came to who was handling the pandemic best.

The poll, which was conducted between March 18 through 22 by surveying 851 individuals nationally, is the first to come out since the coronavirus pandemic forced non-essential businesses, schools, and other venues to shut down across the country.

Trump, for his part, has taken an active approach in leading the U.S.’s efforts to fight the pandemic. The president was an early proponent of banning travel to-and-from China, where the coronavirus first appeared. Since then, the president has expanded his travel ban to include Europe and Canada, which have seen massive increases over the past three weeks.

In recent days, the Trump administration has also been negotiating with congress on a relief package for small businesses and workers impacted by the efforts taken to mitigate the contagion’s spread.

The public seems to be taking notice of such efforts. The Monmouth poll found that the president’s overall approval rating had climbed since the coronavirus outbreak. In February, Monmouth indicated that only 44 percent of voters approved of the job Trump was doing in the White House, while 50 percent disapproved. This month, however, those numbers rose sharply, with 46 percent approving of the job Trump was doing, while only 48 percent disapproved.