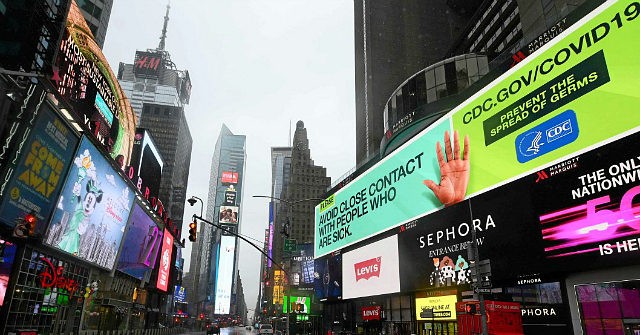 Americans are growing more concerned over the state of the American economy than that of their personal health, a Harris Poll released this week revealed.

The survey, fielded March 21-22 among 2,023 U.S. adults, found that a majority of Americans, 61 percent, now consider the amount of fear in society as “sensible given how serious the [coronavirus] pandemic has become.” That reflects a 15-point jump from the 46 percent of Americans who viewed the fear as warranted last week.

The survey also reviewed the issues people are “increasingly concerned about” and found that concerns over the economy surpass all other worries, including personal health.

Eighty-four percent of respondents, surveyed March 13-14, said they were growing increasingly concerned over the state of the economy, but at the time, worries over the health of older friends and relatives topped the list, with 86 percent. While those concerns have risen over the course of the last week, worries over the economy now top the list, with 91 percent of Americans indicating unease. Meanwhile, 75 percent say they are concerned about their personal health, 90 percent say they are worried about older relatives and friends, and 87 percent indicate concern over the health of Americans “broadly.”

The survey comes as lawmakers fight for an agreement on bipartisan economic relief legislation. Democrats blocked the measure over the weekend after receiving what appeared to be marching orders from House Speaker Nancy Pelosi (D-CA), who flew into D.C. on Sunday — the same day GOP lawmakers claim the negotiations completely fell apart.

President Trump said on Tuesday that he would like to have the U.S. economy reopened by Easter on April 12.

“I would love to have the country opened up and rearing to go by Easter,” he said during a Fox News town hall on Tuesday.