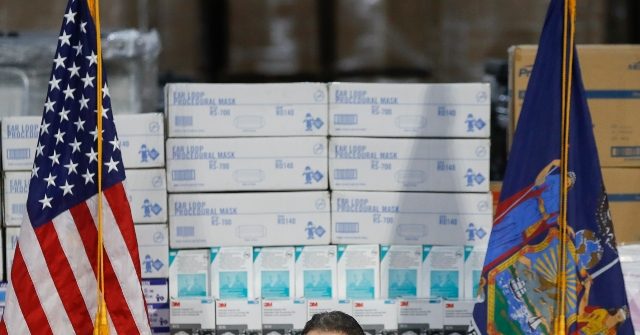 Earlier in March, Cuomo declared that prison labor would be used to produce “superior” hand sanitizer purportedly in an effort to combat price gouging.

“This is also much less expensive than anything the government could buy—a gallon bottle is $6.10, the 7-ounce bottle is $1.12 our cost, and then there’s a very small size… which is 84 cents,” Cuomo boasted of its value. “So it’s much cheaper for us to make it ourselves than to buy it on the open market.” He compared it favorably against Purell and asserted it was yet another product made within New York.

However, Vice reports a New York State Department of Corrections and Community Supervision spokesperson told them inmates are simply re-bottling sanitizer from an unnamed source with the “NYS Clean” branding for distribution.

An anonymous inmate within the Great Meadow Correctional Facility in Comstock, New York, also claimed that Cuomo’s “NYS Clean” hand sanitizer is, in fact, just another brand being re-bottled by the New York State Department of Corrections and Community Supervision’s Division of Industries — also known as “Corcraft.”

The inmate, identified only by the pseudonym “Michael,” told Vice that prisoners are working 24 hours a day to pump the antiviral gel from one container into another. And while Michael claims they were originally told they would be paid two dollars per hour for their tireless efforts — a big raise from the 64-cent average for Corcraft’s “employees” — they are being paid, at best, just a third of that. “Overtime” hours are available but pay the same dismal rate.

Furthermore, the inmates are reportedly being pushed through a grueling schedule to meet the governor’s demands. Despite shifts running through all hours of the day and night, prisoners are expected to follow their regularly scheduled routines — meaning that some must forgo sleep just to bathe or even to buy soap.

“The commissary’s only open from the morning time until like 3, but we’re working at that time or we either gotta go to rec at that time,” Michael told Vice. “Every time we tell them that, they’re ‘Oh, we’re gonna work on it, we haven’t heard from anyone, we sent some emails, they haven’t responded back to us.’”

But any slip, even something as simple as wearing the wrong uniform, means being kicked off the cell block entirely: “If we do anything, they’ll fire us and then we’ll have to move off the block,” he claimed. “They’ll fire us that day, and then at the same time they’ll move us to a different block that we wouldn’t even want to go to, not even the block that we were originally on.”

It is a lot of work for what appears to amount to a positive branding effort by the New York governor. As of the time of this writing, his office has made no comment on the report.