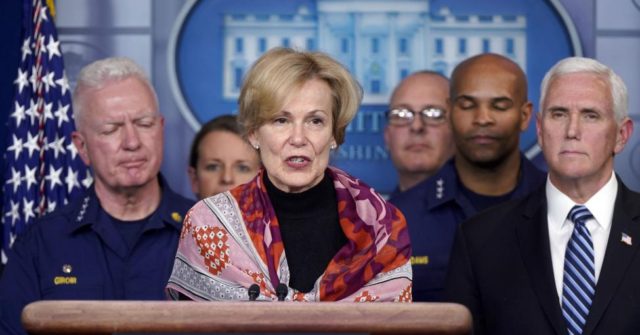 Dr. Deborah Birx, the coordinator of the White House Coronavirus Task Force, indicated on Wednesday that novel coronavirus infection rate predictions suggesting the deadly and highly contagious disease will infect about half the U.S. population are overblown and needlessly frightening the American people.

She indicated that the U.S. response, including the actions of the federal government and the public, would prevent the infection rate from reaching those levels.

The only way the coronavirus would infect about half of the population is if people do nothing, and “every American is doing something,” she said.

Her comments came during the daily coronavirus press briefing at the White House.

[T]hose projections … that implied that 60 percent or 50 percent of the population would get infected, I want to be very clear. The only way that happens is this virus remains continuously moving through populations in this cycle, and the fall cycle, and another cycle.

So, that’s the three cycles with nothing being done. … You can get to those numbers if you have zero controls and you do nothing. And we know that every American is doing something.

“I think the [infection rate] numbers that have been put out there are actually very frightening to people,” Dr. Birx declared.

Some news outlets have suggested the infection rate in the U.S. will be as high as 70 percent of the U.S. population, while others place the figure at about 50 percent.