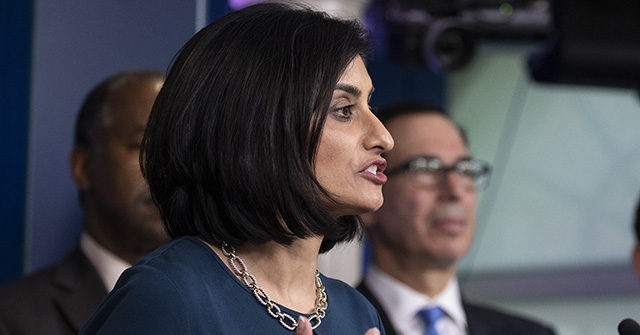 Centers for Medicare and Medicaid Services (CMS) Administrator and White House Coronavirus Task Force team member Seema Verma told Breitbart News Daily how America can “overcome” the coronavirus and what the Donald Trump administration is doing to help Americans throughout the crisis.

Verma first spoke to Breitbart News Daily host Alex Marlow about the CMS’s waiver to expand telehealth, which expands the ability for Americans to talk with their doctor remotely. The CMS administrator said that the telehealth expansion grants Americans greater access to health care and slows the spread of the coronavirus by preventing the spread of the disease to other Americans at the doctor’s office or hospital.

Verma said, “It is rapidly expanding across the country under the president’s leadership. One of the things that we know right now is that it’s better for people to stay at home. Those are the recommendations the president and the vice president have put out, 15 days to slow the spread. We’ve said very clearly to individuals, especially those that are elderly with underlying health conditions, that you need to stay home. And so that’s why we’re using telehealth and promoting telehealth because we know that people still need health care. It may be completely unrelated to the coronavirus, you may have heart disease and diabetes, it allows people to communicate with their doctors from the safety of their own home, which is so important.”

She continued, “Also, for individuals that are experiencing flu-like symptoms, it’s better that they have a conversation with their doctor over the phone rather than coming into the office or traveling, they could be sitting in a waiting room and infecting other people. So, what we’re finding since these changes have been made, the president made this announcements a couple of weeks ago, it’s just rapidly expanding across the country. Many healthcare providers were doing some telehealth before, others were not, and that’s why when we put out this announcement, we also said, ‘Hey you don’t need any special equipment’; we’re going to relax some of the rules and regulations so that doctors can just use FaceTime, they can just use Skype to be able to communicate with their patients.”

Verma also urged Americans to help join the cause to prevent the spread of the coronavirus. She said that Americans should wash their hands frequently, stay at home to practice “social distancing,” and to contact their doctor if they believe they have coronavirus symptoms.

Marlow noted that Vice President Mike Pence said during a recent press conference that reportedly 90 percent of people who get tested for coronavirus end up not having coronavirus.

“We are also in flu season, so if you are sick, it may or may not be because of the COVID virus,” Verma noted.

“We’re learning that it’s a sticky virus. It stays on surfaces longer, and I think that we should keep that in mind in terms of the precautions that we’re taking,” she added.

Marlow noted that the infection rate for parts of the country other than New York state remains relatively low.

She said, “It could be for two reasons: A lot of communities are listening to the recommendations. If you’re taking aggressive mitigation strategies that could have an impact on the rate of spread in communities. The second thing is the testing. We’re still working through the backlog of tests that’s increased dramatically. Yesterday they announced that we have done as many tests as South Korea; we did as many tests last week as South Korea has done in total. That is rapidly increasing, and that’s going to give us a better sense of where the virus is. But I think up until this point, we haven’t had a lot of data and we’re catching up. So, I think it’s rapidly changing, and that’s why the mitigation strategies are so important. Fifteen days to slow the spread, all of the recommendations about staying at home, especially if you’re sick, washing your hands, that’s why all of those things are so important because we want to do better than what the models show us could potentially happen.”

Verma’s interview on Breitbart News Daily follows as President Trump said during a Fox News town hall that he would like to start reopening the economy by Easter, which is roughly two weeks away.

“I would love to have the country opened up and rearing to go by Easter,” the president said.

Verma said that the Trump administration remains optimistic for a quick reopening of the economy; however, the president will only make the decision to do so after it remains safe for Americans to start returning normal life.

She said, “I think we’re trying to remain optimistic, but at the end of the day, we’re going to use data to guide our decisions. I think the president has from the very beginning made strong decisions based on data. We had some of the world’s leading experts advising the president, and he’s done a great job of listening to them and making decisions, and he’ll continue to do that. I think Easter is a timeframe. But, at the end of the day, he is going to make decisions based on the data, and he’s going to do what’s best for the American people, making sure that they’re safe.”

Verma added that the phase three congressional coronavirus response package “is an important part of our overall response. We have a strong public health response, but also having an economic response is the recognition that so many families across the country are being impacted, small businesses, workers that want to work but are being told to stay at home. So this is an important part of the overall strategy.”

Reports have suggested that the anti-malaria drug chloroquine could serve as a potential treatment of the coronavirus. Trump has promoted the use of chloroquine.

Verma said that there are many potential treatments of coronavirus; although, the Food and Drug Administration (FDA) should ensure that any possible treatments are safe and effective against the coronavirus.

Verma concluded by urging Americans to take precautions to prevent the spread of the coronavirus.

“I know it’s hard, but you got to listen to the recommendations, 15 days to slow the spread. It’s very important that we all do our part,” she said. “As Americans, we’re strong; we’re resilient, and this is just a war that we’re fighting that we will successfully overcome.”