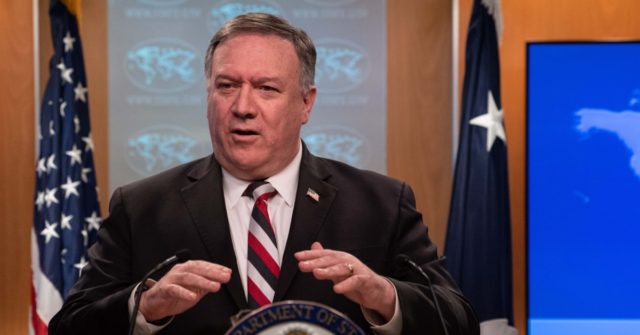 Speaking during an exchange with the Washington Watch radio program, Pompeo repeated previous charges Beijing’s delay in sharing information about the virus had created risks to the global community and this had “truly put thousands of lives at risk.”

He said China’s handling of the crisis exemplified the single-party Communist state’s authoritarian and nationalist tendencies.

“My concern is that this cover-up, this disinformation that the Chinese Communist Party is engaged in, is still denying the world the information it needs so that we can prevent further cases or something like this from recurring again,” he added, according to Reuters.

Pompeo also accused Iran and Russia of waging their own distinct disinformation campaigns.

“The disinformation campaign from Russia and Iran as well as China continues,” he said. “They’re talking about it coming from the U.S. Army and they’re saying maybe it began in Italy, all things to deflect responsibility.”

This is not the first time Pompeo has publicly decried China’s response to the epidemic and accused the communists of being economical with the truth.

As Breitbart News reported, last week hit directly at the Chinese Communist Party for what he described as a “disinformation campaign” on the coronavirus.

Pompeo explained how the Chinese government had stood in the way of many efforts by the global community to get an early grasp on the pandemic. He said:

We have had an incredibly difficult time getting professional medical people in. You’ll recall early on, we offered to have America’s finest experts to travel there to assist them, to assist the World Health Organization. We weren’t permitted in. These are the kinds of things that the Chinese Communist Party has done that had put the world and the world’s people at risk. They haven’t been sufficiently transparent, and the risk, Sean, that you find, where if we don’t get this right, if we don’t get to the bottom of this, is this could — this could be something that’s repeatable, maybe not in this form, maybe not on this way, but transparency matters.

Pompeo on Tuesday did not shy away from outling the consequences down the track for China and its intransigence.

“The time will come for recriminations,” he said, but added it was important for the world to know now how best to stem the global threat.

“This is an ongoing global crisis, and we need to make sure that every country today is being transparent, sharing what’s really going on, so that the global community, the global health care, infectious disease community can begin to work on this in a holistic way.”

Pompeo hinted “very important decisions” would have to be made in future about how the U.S.-China relationship progressed.

For its part, China has always rejected any criticism of its handling of the matter.

As Breitbart News reported, the Chinese Foreign Ministry and the Communist Party’s propaganda arms erupted in rage earlier this month when Pompeo repeatedly used the term “Wuhan virus” to refer to the malady.

Disinformation is not only coming from random actors around the world – but also from the Chinese Communist Party, Russia, and the Iranian regime. We must not permit these efforts to undermine our democracy, our freedom, and how we’re responding to the Wuhan Virus. pic.twitter.com/WtB2Isrkkf

The Global Times, a Chinese communist propaganda outlet, railed against Pompeo for his remarks, calling them, among other insults, “morally irresponsible,” “ridiculous,” and “rude.”

“As the chief U.S. diplomat, Pompeo insisted on speaking of the ‘Wuhan virus’ despite the opposition of WHO and international public opinion, in an attempt to arouse resentment among those affected countries against China,” the Global Times asserted.

“Pompeo’s move not only exposes malicious U.S. intentions toward China without regard to common sense, but also hits a new low in his personal conduct.”