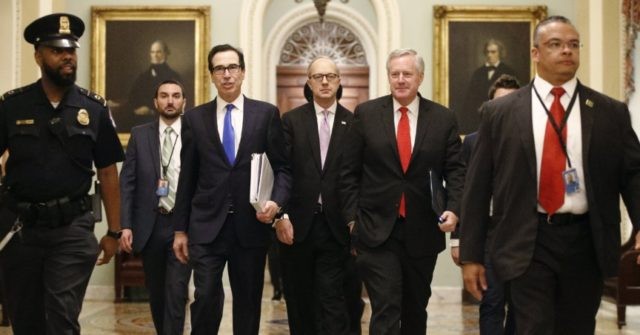 The Senate released the final text for the $2 trillion coronavirus package Wednesday evening that would provide immediate economic relief to small businesses and Americans.

The Senate will likely vote on the $2 trillion coronavirus package on Wednesday night after the chamber votes on an amendment offered by Sen. Ben Sasse (R-NE).

The amendment would bar Americans from getting more from unemployment than they would while they are employed. The measure is supported by Sens. Lindsey Graham (R-SC), Tim Scott (R-SC), and Rick Scott (R-FL) and will require 60 votes to attach the amendment to the bill.

Treasury Secretary Steven Mnuchin rebuffed the Republican senators’ concerns over the bill, contending this will help those who involuntarily lost their jobs.

“I don’t think it will create incentives, most Americans, what they want, they want to keep their jobs,” Mnuchin said.

“We need to get this money into the American economy and American workers, that’s the importance of this,” he added.

It will likely fail to pass.

After the Senate votes on the amendment, the Senate will consider the coronavirus legislation, which will only require a simple majority, or 51 votes, to pass through the chamber.

After the Senate presumably passes the legislation, the House will move to pass the bill on Thursday quickly.

The coronavirus package contains direct cash payments to most Americans, a dramatic expansion of unemployment insurance, aid to state and local governments, and support for hospitals strained by the coronavirus.

McConnell delivered an impassioned speech on the Senate floor on Wednesday about how the country will defeat the coronavirus.

“Today, the Senate will act to help the people of this country weather this storm,” McConnell said. “Our nation needed us to go big and go fast, and they did.”