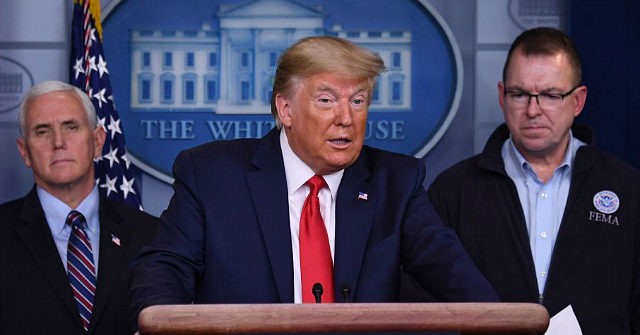 More than six million tablets of hydroxychloroquine sulfate donated by the Israeli drug company Teva Pharmaceutical Industries Ltd. have arrived in the U.S. and are currently being shipped to national wholesalers to be distributed to American hospitals, a spokesperson for Teva confirmed to Breitbart News.

Ten million tablets in total are slated to arrive in the U.S. within a month as part of Teva’s donation.

The antimalaria drug has been touted by President Donald Trump as a possible treatment for Chinese coronavirus and experts say there is a theoretical basis that it could have a treatment role.  Some doctors who say they have used hydroxychloroquine sulfate in conjunction with other medications have seen positive developments in Chinese coronavirus patients.

Scientists say more trials are needed before determining the possible effectiveness of hydroxychloroquine sulfate in Chinese coronavirus treatment. Still, some doctors are already prescribing the drug on and off-label since they argue the side effects are usually not that strong and there is no time to wait for long-term data.

Hospitals are reportedly seeking to stockpile the drug in anticipation of a flood of coronavirus patients and many pharmacies say they are experiencing a massive number of prescription requests for hydroxychloroquine sulfate.

New York State began clinical trials of hydroxychloroquine on Tuesday along with zithromax and chloroquine.

Teva is one of the world’s largest makers of hydroxychloroquine. A spokesperson confirmed earlier reports that the company would ship six million tablets to wholesalers for distribution to U.S. hospitals by March 31, and more than 10 million within a month.

The spokesperson said six million tablets have already arrived in the U.S. and are being distributed to hospitals by three national wholesalers – ABC, Cardinal and McKesson.

“We are committed to helping to supply as many tablets as possible as demand for this treatment accelerates at no cost,” said Brendan O’Grady, Teva Executive Vice President, North America Commercial. “Immediately upon learning of the potential benefit of hyroxychloroquine, Teva began to assess supply and to urgently acquire additional ingredients to make more product while arranging for all of what we had to be distributed immediately.”

Trump has repeatedly touted the use of hydroxychloroquine treatment combined with the antibiotic azithromycin, hailing the combination at press conferences and in a series of tweets. Some doctors promote the combination of that cocktail with zinc and an antibacterial.

….be put in use IMMEDIATELY. PEOPLE ARE DYING, MOVE FAST, and GOD BLESS EVERYONE! @US_FDA @SteveFDA @CDCgov @DHSgov

“What do we have to lose?” Trump said at a press conference Saturday when speaking about the drug’s possible use in the current pandemic. “We’re going to find out very shortly whether or not it is going to work. I feel very confident.”

“At my direction, the federal government is working to help obtain large quantities of chloroquine,” Trump said during a press conference earlier this week. “We think tomorrow, pretty early, the hydroxychloroquine and the Z-Pak I think is a combination is looking very, very good and it’s going to be distributed.”

The publicity has led to a surge in demand for hdyroxychloroquine, which is FDA approved as a treatment for malaria.

The drug has the apparent ability to block some cellular processes involved in the replication of viruses, including coronaviruses as a broad group although its exact effectiveness in Chinese coronavirus is still being studied.

The treatment combination is not believed to kill coronavirus. Instead it could protect cellular lining from further penetration.  This could mean that if it does work, the drug cocktail would likely have more success in patients who are in the initial stages of infection and could be less effective in those who are already in critical condition.

According to Drugs.com, common side effects of hydroxychloroquine include:

Patients are urged to call their doctor if they develop:

In advocating for hydroxychloroquine sulfate, many have pointed to a limited French study that had positive results.

The French study has attracted the most attention. Doctors gave hydroxychloroquine to 26 people with confirmed coronavirus infections, including some with no symptoms. Six also were given the antibiotic azithromycin.

Some of the 26 were not counted in the final results because they didn’t complete the study — what’s known as “lost to followup” — but that included three who worsened and were sent to intensive care, one who died a day after later testing negative for the virus, and one who stopped treatment because of nausea.

After six days, no patients given hydroxychloroquine plus azithromycin had virus detected in swabs from the back of the nose, versus 57% of those given the malaria drug alone and 12.5% of some other patients who received neither drug.

The journal Nature Medicine reported on lab tests that demonstrated the drug blocked coronavirus’ ability to enter cells but that doesn’t mean the same would be repeated in human trials.

And a report from China claimed chloroquine helped more than 100 patients. An “expert consensus” document from China stated: “Here we found that treating the patients diagnosed as novel coronavirus pneumonia with chloroquine might improve the success rate of treatment, shorten hospital stay and improve patient outcome.”

Some doctors who have used hydroxychloroquine in the U.S. to treat Chinese coronavirus have been cited in news media reports as documenting successes.

“We hope for optimistic results,” Cuomo said during a press conference Tuesday about the tests. “The president and the FDA accelerated that drug coming to New York so the hospitals will start using that drug today.”

“I’ve spoken with a number of health officials and there is a good basis to believe that they could work,” Cuomo said. “Some health officials point to Africa, which has a very low infection rate and there’s a theory that because they’re taking these anti-malaria drugs in Africa, it may actually be one of the reasons why the infection rate is low in Africa. We don’t know, but let’s find out and let’s find out quickly.”

Some scientists, however, have had mixed opinions about the drug’s effectiveness for the current pandemic.

“It is a very weak study … leaving us in suspension of whether the combination strategy has any merit,” said Dr. Eric Topol, a cardiologist and head of the Scripps Research Translational Institute in San Diego. He was talked about the French study.

“It could very well be that the drug is reducing viral shedding but having no impact on the clinical course of those patients,” said former FDA commissioner Dr. Scott Gottlieb.

David Goldman, a pediatric infectious disease specialist at the Children’s Hospital at Montefiore, told Bloomberg News that although the French study “isn’t optimal and doesn’t constitute enough data to validate the new indication for that drug,” it does combine many years of the use of hydroxychloroquine to treat outbreaks of SARS and MERS.