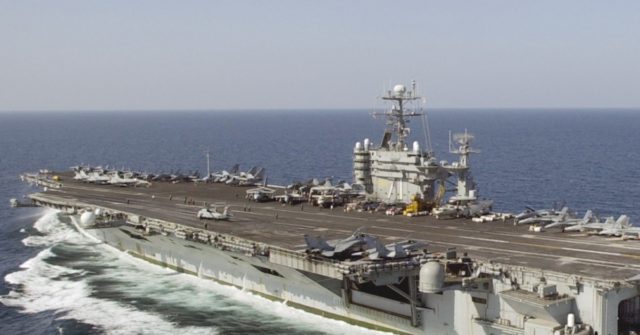 The U.S. Navy is fighting to contain a coronavirus outbreak at sea in the Pacific Ocean, aboard the aircraft carrier USS Theodore Roosevelt.

Navy officials have confirmed at least eight positive cases discovered aboard the ship of more than 5,000 sailors, according to the Chief of Naval Operations Adm. Michael Gilday.

“We are taking this threat very seriously and are working quickly to identify and isolate positive cases while preventing further spread of the virus aboard the ship. No Sailors have been hospitalized or are seriously ill,” he said in a statement on Thursday.

He said the medical team aboard the ship is performing testing for the crew.

The ship is headed to Guam for a previously-scheduled port visit, Navy officials said. There, sailors will continue to be tested, isolated, and treated if necessary.

Gilday said the Navy expects more positive tests and that sailors will be brought to U.S. Naval Hospital Guam for further evaluation and treatment if necessary. Other sailors will be restricted to a pier.

“We’re taking this day by day. Our top two priorities are taking care of our people and maintaining mission readiness. Both of those go hand in glove,” Gilday said.

“We are confident that our aggressive response will keep USS Theodore Roosevelt able to respond to any crisis in the region.”

Acting Navy Secretary Thomas Modly said Thursday that the entire crew will be tested for coronavirus.

He said the first three sailors who were identified as positive and flown off the ship earlier this week “are currently doing fine,” and none of them have required hospitalization.

“Their symptoms are very mild, they are aches and pains and those types of things, sore throats, but nothing that required hospitalization. So they are in quarantine now on Guam,” he said.

Modly said five more sailors were flown off after that and several others are in isolation. The Daily Beast reported on Thursday that there were 23 positive cases aboard the Roosevelt.

Navy officials said they are looking into how the sailors contracted the coronavirus.

The Roosevelt had stopped in Vietnam 15 days ago, but Gilday said earlier this week that when the sailors were allowed off the ship, there were only 16 positive cases of coronavirus in Vietnam that were further north up the coast from where the sailors had docked in Da Nang.

The U.S. Navy has four large deck ships at sea. So far, the Roosevelt is the first ship at sea to have cases of coronavirus aboard.

Navy officials say that sailors are practicing social distancing aboard ships and that going forward, Gilday said every port visit has been canceled except for ships that need to pull in for maintenance or resupply.