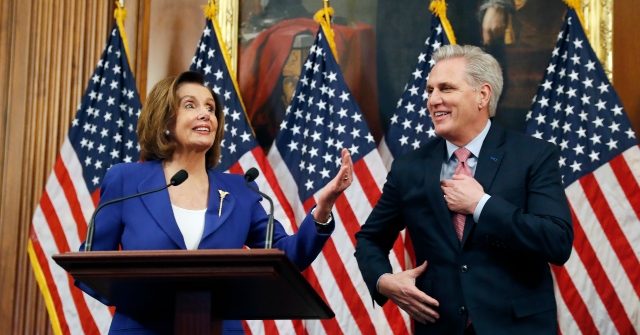 The House passes a substantial emergency relief bill on Friday afternoon that would provide aid to the small businesses, hospitals, and Americans suffering from the impact of the coronavirus outbreak.

The legislation costs roughly $2 trillion and is approximately 8800-pages long.

The House vote follows as the Senate unanimously passed the legislation on Wednesday night, with 96 votes in favor of the bill and no senators opposed to the bill.

The House became enflamed in controversy after Rep. Thomas Massie (R-KY) threatened to force a recorded vote on the coronavirus package. The backlash engendered frustration from lawmakers as well as President Donald Trump, who demanded that Republicans throw the Kentucky congressman out of office.

“WIN BACK HOUSE, but throw Massie out of Republican Party!” Trump wrote on Twitter.

When Massie tried to force a recorded vote on the legislation, the House overwhelmed the congressman and passed the coronavirus package.

House lawmakers took up spots in the House public gallery to create more space between members of Congress while maintaining a quorum to prevent Massie from placing a recorded vote on the measure.

Wow!
Members are now taking up spots in the public gallery above the actual House floor.
Staff are opening more doors for more members to go to the gallery above.
Looks as if they’ll socially distance that way. And establish a quorum, defeating Massie.

House Ways and Means Committee Chairman Kevin Brady (R-TX) said on the floor before the vote:

We answer with faith in ourselves and our abilities, faith in our free enterprise system, our amazing health care system, and yes, faith that when the chips are down Congress can come together with our President to help hard working families and businesses when they need it most.

This is the challenge of a lifetime. But if we keep pulling together, passing this bill without delay, we take another step toward that day when we answer the door and fear is no longer be there.”

House Republican Leader Kevin McCarthy (R-CA) said before the vote that the bill represents Congress’ commitment to helping the country combat the pandemic. He said:

This bill is not only a rescue package, it’s a commitment — a commitment that your government … and the people whom you elected to serve you … will do everything we can to limit the harm and hardship you face, both now and in the foreseeable future.

If you do your part, I promise: we will do ours.

Madame Speaker — as I said earlier, it is our responsibility to act…to put aside our differences and to do what’s right for the American people.

The legislation will move to the president’s desk to sign.