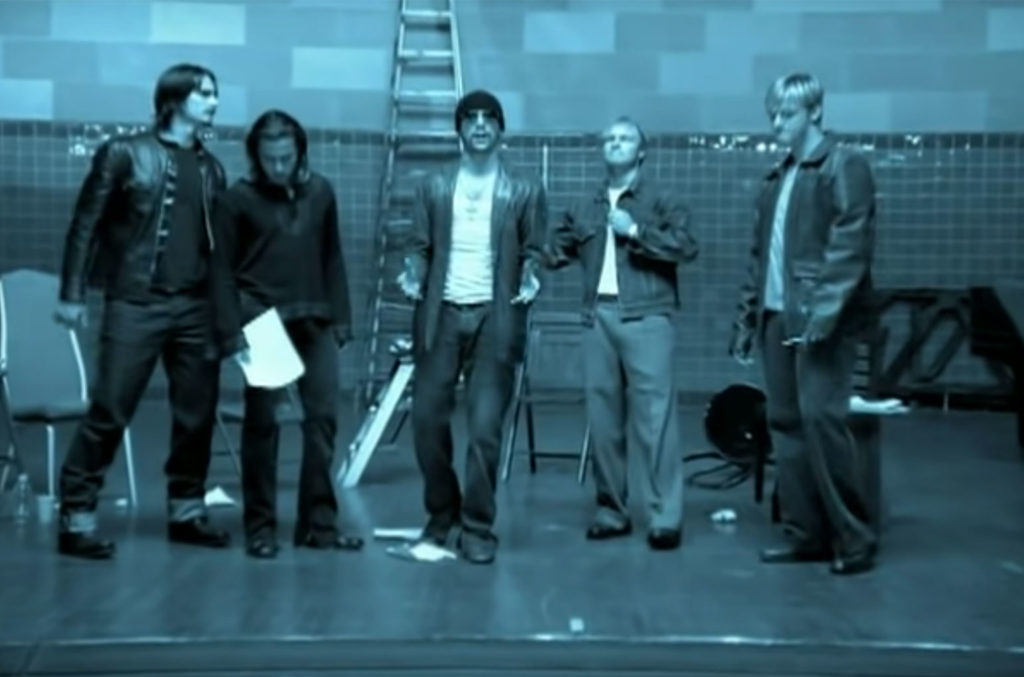 Following our Billboard staff-picked list of the 100 greatest songs of 2000, we’re writing this week about some of the stories and trends that defined the year for us. Here, we examine a quietly important boy band single that hinted at where a massive pop group would eventually go after their teenybopper years had passed.

At the turn of the century, two five-piece boy bands were locked in a war of one-upmanship based on raw, hard numbers. Were Backstreet Boys or *NSYNC the bigger pop act? It often depended upon whose album had come out more recently.

After the two groups spent 1998 volleying hit singles — for every *NSYNC hit like “I Want You Back,” there was an equally potent “Everybody (Backstreet’s Back)” from across the aisle — BSB pulled ahead with the release of Millennium in May 1999. Led by the TRL-dominating sing-along “I Want It That Way,” Backstreet Boys’ full-length breakthrough sold 1.1 million copies in its first week of release, a single-week sales record at the time.

Ten months later, it was *NSYNC’s turn at the plate. Second album No Strings Attached was released in March 2000, and thanks in part to smash lead single “Bye Bye Bye,” 2.4 million copies of the album were sold in its first week — a staggering number, considering that BSB had just set the record the previous year, only to watch it get more than doubled. As *NSYNC spun off more hits from No Strings Attached in 2000 (including their lone Hot 100 chart-topper “It’s Gonna Be Me”), the subtext was clear: Your move, Backstreet — see if you can top this.

And Backstreet thought they were going to. In the lead-up to the release of their Millennium follow-up Black & Blue, the group’s AJ McLean claimed that the new album would “break *NSYNC’s record and our record combined the first week out.” The expectation, then, was the unprecedented: over 3 million copies sold in a single week! With Black & Blue given a Nov. 21, 2000 release date, Backstreet’s highly anticipated new album was primed for Black Friday shopping and holiday gifting. All eyes were on BSB’s next lead single — ideally, another “I Want It That Way” for the group, and an answer to *NSYNC’s blockbuster run — when “Shape of My Heart” was released on October 3, 2000.

The truth is, “Shape of My Heart” was neither another immortal karaoke anthem in the vein of “I Want It That Way,” or the song to put Backstreet Boys’ biggest rivals in their place. That’s because “Shape of My Heart” is, by BSB standards, incredibly muted. A mid-tempo reflection on mistakes made and weaknesses admitted, the song was miscast as a flashy comeback that would return serve against *NSYNC and hijack pop radio for months. In the end, “Shape of My Heart” peaked at No. 9 on the Hot 100 — a respectable hit, but short of the commercial heights of “Everybody (Backstreet’s Back),” “Quit Playing Games (With My Heart)” and “I Want It That Way” for the group — while Black & Blue would go on to bow with 1.6 million copies sold in its first week, a still-mind-boggling sum that nonetheless fell far short of McLean’s prediction.

Nearly 20 years removed from its release, we can hear “Shape of My Heart” for what it really is: the sound of a boy band becoming a group of men. Black & Blue was the first Backstreet Boys album released with all five members in their twenties — some of them were even staring down their thirties. There’s still a bubblegum chorus, clean pop structure and tons of vocal harmonies — all thanks in part to Max Martin, who co-wrote and co-produced the track. But there’s also soft-pop guitar work, low-key percussion and a lyrical focus on growing beyond past mistakes, which allowed “Shape of My Heart” to tell the BSB story from a mature perspective for the first time.

Then there’s the music video, which was the polar opposite of the ostentatious visuals BSB had favored for singles like “Everybody (Backstreet’s Back)” and “Larger Than Life.” Gone are the spaceships and goofy costumes, replaced by inoffensive leather jackets, shaggy hair and a blue-tinted theater setting, with the Boys watching a rehearsal for a fictional production (called The Shape of My Heart) from the wings.

Indeed, the mood between the Boys in the video is intimate and adult — less of a gaudy spectacle, more of a catch-up between longtime friends. “It was definitely a strategy to give them a new look,” says Rolston, who also helmed videos for Destiny’s Child, Dido and Mandy Moore around that time. “And I think every pop star at that time, every video was a new way to view that star. That was sort of the point of videos — to be a shape-changer, to play with their image and keep evolving it.”

In the end, “Shape of My Heart” did change the direction of Backstreet Boys, who became less-prolific recording artists after the release of Black & Blue, and grew past their teen-heartthrob days as the teenybopper bubble exploded. *NSYNC released their victory-lap album, Celebrity, in 2001, then never released another project; BSB’s next album, Never Gone, came a full five years after Black & Blue.

“Shape of My Heart” is the last Backstreet Boys single to reach the top 10 of the Hot 100, but in retrospect, the song hinted at the adult career that stretched multiple decades in front of BSB. Shades of “Shape of My Heart” exist in songs like the 2005 ballad “Incomplete,” 2013 pop-rock standout “Show ‘Em (What You’re Made Of)” and last year’s surprise hit “Don’t Go Breaking My Heart, which preceded the group’s DNA album — their first set to top the Billboard 200 albums chart since Black & Blue. If “Shape of My Heart” didn’t live up to BSB’s lofty expectations at the time, it certainly provided the group with a post-teen blueprint.

“I was trying to think optimistically,” McLean said when downplaying his commercial predictions for the Black & Blue debut. “It’s not about quantity, it’s about quality of the actual music.” He ended up being right: “Shape of My Heart” wasn’t a smash, but it holds up as a finely drawn pop song, and an important inflection point for one of the era’s biggest groups.