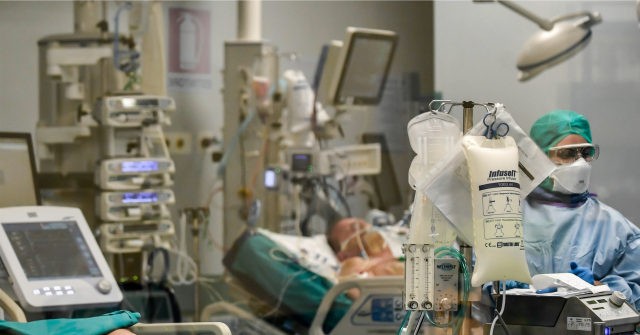 A Michigan emergency room nurse on the front lines of the coronavirus pandemic issued a dire warning and chilling update on the reality of the virus and the strain it is having on hospitals, begging people to stay home and warning that “it’s getting to the point now that it’s going to be just like Italy.”

Mary MacDonald, who works for the Ascension Health System, posted a viral update on Instagram this week, detailing her experience after working at the Southfield location to assist with an influx of patients.

“I’ll have to admit, in being totally transparent, if you had asked me ten-plus days ago if I thought this was going to get as bad as it was, I would have told you no,” she said in the video:

“I mean, you heard the rumors. You saw the trends. But until you see if first hand, you just have no idea what it’s like — what’s it’s going to be like. And it’s truly frightening,” she continued, explaining that they are now seeing double — even triple — the number of patients coming in, many of whom are not getting tested.

Coming into the hospital, she said, does not serve to benefit a person unless he or she is experiencing “respiratory distress,” and even then, the hospitals are quickly running low on vital supplies to treat those patients — from ventilators to Tylenol.

“It’s getting to the point now that it’s going to be just like Italy. We intubated, from 10:00 p.m. last night to this morning, we intubated two of my patients within a half hour. And upwards of ten patients were put on ventilators. My patient took the last ventilator available in the hospital,” she said, further detailing the chilling new reality.

“Resources are very slim. We have no medications to keep these patients even ventilated, let alone ventilators,” she said. “Medications like fentanyl or propofol that would keep a patient sedated while they’re intubated we’re out of. … We’re out of Tylenol.”

“And that’s not even going back to the fact that we don’t have any ventilators to put these patients on, so we’re going to start making life or death decisions in regards to people’s care,” she said.

“I never wanted to go into a career where I wasn’t able to save everyone,” the nurse said.

“This is truly scary, and nobody is taking it seriously,” she continued, noting the pictures on social media of spring breakers partying on beaches and others not practicing proper social distancing.

Hospitals are also running out of gloves, and medical professionals are forced to reuse masks “because we are completely out of resources,” MacDonald continued.

“There are no masks. There are no gowns. They’re running low on gloves because everyone has panicked and stockpiled this so that medical staff doesn’t have it,” she said, showing the camera the brown paper bag she uses to transport her mask to and from work.

“We cannot stay safe, and we cannot care for all of these people that are coming in because no one is taking this seriously. And I am being super transparent. I was one of those people that wasn’t taking it seriously,” she said.

“But I’m here to tell you that you need to. We are literally making life and death decisions for people,” MacDonald added, begging people to heed her advice and stay home.

“Stay home with your loved ones. Don’t go out. Don’t go to the grocery store. Don’t go through the drive-thrus. Don’t do anything that could put you at risk to have to see me at the end of the tunnel,” she said. “I’m telling you it’s not worth it. And I don’t know what I can do to save people anymore, and that is something I’ve never wanted to say in my entire career.”

Her warning comes as Michigan emerges as one of the United States’ latest coronavirus hotspots, with nearly 3,000 confirmed cases and 60 related deaths, including a Detroit mother of four.

Michigan Gov. Gretchen Whitmer (D) has issued stringent stay-at-home orders, which prohibit “all public and private gatherings of any number of people occurring among persons outside a single household.”