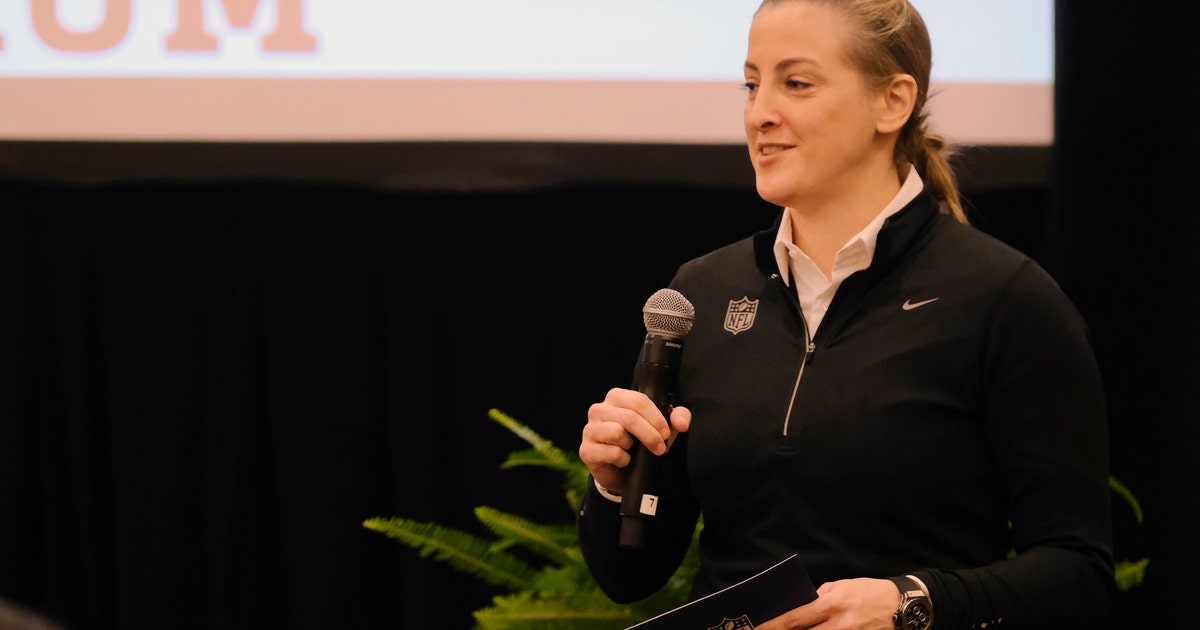 NEW YORK (AP) — Sophia Lewin was 12 years old when she told her father about her career goal: coaching football.

Her dad didn’t exactly scoff, but he suggested perhaps scouting would be a more attainable profession.

Nowadays, there are women handling both jobs.

According to 2019 research by the Institute for Diversity and Ethics in Sport, there are 73 female vice presidents throughout the league. The NFL’s chief operating officer is Maryann Turcke. One-third of the working force in NFL offices is made up of women.

As the end of Women’s History Month nears, maybe Lewin’s dream isn’t far-fetched at all now that she is 22 — and an assistant coach at Princeton.

Lewin and 39 others in entry-level college and high school football roles participated in the fourth annual NFL Women’s Careers in Football Forum at the scouting combine in Indianapolis last month. To say the event can open doors is like saying Tom Brady owns a Super Bowl ring.

“The program was awesome,” says Lewin, who has landed a summer position with the Bills. “To be at Indianapolis during the combine is pretty special and for all of them to give up their time from different teams and NFL executives — obviously it’s a very busy time for them.

“But to be in that environment that is so very professional and having a great opportunity to make significant connections with them. … It’s an opportunity to fast-forward our careers; a lot of us are so young. Most of us would not be in that position if not for this incredible program.”

The forum was begun by Sam Rapoport, the league’s senior director of diversity and inclusion. The idea is simple: providing those opportunities.

“On the football side, women are popping up in roles that were very traditionally only held by males: video and quality control, and scouting and football operations, and analytics,” Rapoport says. “Now in coaching, I definitely don’t think there are limits. We see women in strength and conditioning, in assistants’ roles, and we have the first female chiefs of staff.

“Coach (Bruce) Arians put it best when he said a coach is a teacher and if you can teach you can be a successful coach. That’s certainly not specific to one gender.”

As is being proved in a variety of places, including San Francisco, for which Katie Sowers coached in the Super Bowl in February.

The Redskins hired Jennifer King last month as a full-year coaching intern with the offensive staff. King, a former pro player in the Women’s Football Association, where she won a championship, also interned for the Panthers and was an assistant coach for the Alliance of American Football’s Arizona franchise. She has an extensive basketball coaching resume, running the women’s program at Johnson & Wales in Charlotte, North Carolina, also winning a national title.

King, too, attended the forum, in 2018. She spent 2019 as an offensive assistant at Dartmouth — coach Buddy Teevens is a strong advocate of the NFL program — and helped the school win the Ivy League title.

At the end of February, she also was at the combine. With a job.

“I work with the Redskins running backs and also help out with quality control,” she says, noting that quality control means pretty much everything from breaking down film to preparing meetings to searching for talent. “I did some analysis of the running back guys and kept my eyes at the combine on people who might interest (the team).”

King gives full credit to Rapoport’s program for helping her make inroads, both at Dartmouth and now in Washington.

“The benefit of it is obviously access to head coaches and general managers and high-ranking people in football, and you don’t get that access anywhere else,” King said. “They get to speak directly to you — there’s no place like that.

“I think it is great they have seen that gender does not matter when it comes to football, and the NFL has done a great job steering people into operations and scouting and coaching, and to put people in position to be successful. That is all people wanted, I think, was that opportunity or chance to become a part of it.”

“The forum is a way to make connections at the NFL level where I would never have had personal meetings with coach (Sean) McDermott,” she says of Buffalo’s head man. “A chance to turn our goals into reality. What Sam built was that bridge for us.”