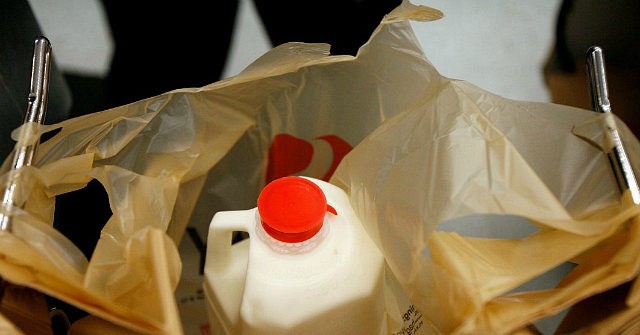 States that introduced “green” regulations that taxed single-use plastic grocery bags in an effort to eventually annihilate them are now welcoming them back as health officials caution of possible contamination with reusable bags.

Connecticut Gov. Ned Lamont (D) said Thursday he was suspending the ten-cent tax on single-use plastic bags at grocery stores and other retail businesses as one of his actions “to mitigate the spread of COVID-19.”

“The latter move is to curb the use of personal bags that could bring the virus into a store,” reported the Journal Inquirer.

Neighboring Massachusetts Gov. Charlie Baker (R) banned reusable bags in stores this week and lifted bans on plastic bags as well “as part of his administration’s latest steps to limit the spread of the coronavirus,” reported the Boston Business Journal.

“Baker announced Wednesday that stores cannot charge for either paper or plastic bags, which in some communities have previously cost 5 cents per bag,” noted the report.

New York State and Maine will also delay enforcement of their bans on single-use plastic bags.

In New York, a lawsuit challenging the ban on plastic bags has also been delayed because of the coronavirus crisis.

Basil Seggos, commissioner of the New York State Department of Environmental Conservation, disagreed with a postponement of the plastic bag ban and tweeted:

Folks, if you are concerned about the cleanliness of your reusable bag, please consider washing it— as you wash clothes or hands. It’s good hygiene anyway.

New Yorkers are pleased with the bag ban and have no interest in a return to polluting ways.

In order to prevent the spread of COVID-19 through grocery sales, and to promote and secure the safety and protection of the people of New Hampshire … all grocery stores … and any other establishment within this State offering groceries for sale, shall transition to exclusive use of store provided single use plastic or paper bags when bagging groceries or other products for customers.

A report at New Hampshire’s Josiah Bartlett Center for Public Policy asserted that, as many states forged ahead with plastic bag bans, “concerns about public health tended to be dismissed, even though studies have shown genuine potential health hazards.”

In June 2018, for example, researchers at Loma Linda University School of Public Health studied the possible transmission of norovirus through reusable grocery bags (RGBs) at the supermarket. After inoculating RGBs with a surrogate virus to evaluate how the pathogens traveled within a grocery store, researchers found the surrogate virus “spread to all surfaces touched by the shopper; the highest concentration occurred on the shopper’s hands, the checkout stand, and the clerk’s hands.”

The authors concluded the high concentration of the virus warrants public education about washing RGBs between use. Yet, many people simply empty them of groceries and meats and then replace them immediately in their cars so as not to be without them for their next shopping trip.

A now widely reported University of Arizona study from 2011 found so much bacteria in reusable grocery bags that the study’s lead author called reusable bags “a serious threat to public health, especially from coliform bacteria including E. coli, which were detected in half of the bags sampled.” When bags contaminated by meat juices sat in cars for two hours, the number of bacteria increased ten-fold. The study’s author warned that “consumers are alarmingly unaware of these risks and the critical need to sanitize their bags on a weekly basis.”

Ill-conceived bans on disposable containers such as plastic shopping bags, water bottles, to-go cups and straws need to be reconsidered along with the many other unnecessary and potentially dangerous regulations this outbreak is exposing.

Research clearly shows that poorly handled reusable shopping bags are like little Ubers for dangerous micro-organisms. Governor Sununu deserves credit for taking this public health risk seriously when other state and local elected officials would not.

At the Daily Signal, Jarrett Stepman also pointed to a study published at the Journal of Environmental Economics and Management that found plastic bag bans actually do not significantly reduce waste.

Similarly, Just Facts produced a video in August demonstrating that plastic bags are actually better for the environment than paper and reusable bags.

“The bottom line is, the current crisis has revealed the misguided nature of plastic bag bans, and now cities and states must move quickly to prevent these bans from exacerbating the coronavirus pandemic,” Stepman observed.