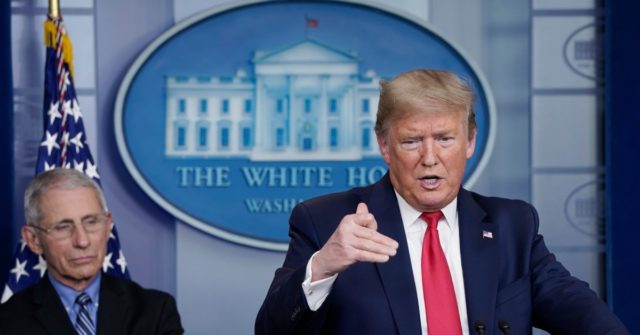 President Donald Trump said Friday he has no plans to suspend import tariffs.

“They’re not even talking to me about it,” Trump said. “More Fake News.”

Trump was asked about suspending tariffs during the daily coronavirus briefing on Friday afternoon. A few minutes earlier the Wall Street Journal reported that a senior administration official had said that customs duties would be suspended for three months.

Trump said that China had not requested a suspension of the tariffs.

“Everybody keeps saying, ‘Are you going to suspend the tariffs?’ Well, the answer is no,” Trump said. “President Xi never even brought it up last night. It wasn’t discussed. It’s fake news. Tell the Wall Street Journal.”

The Wall Street Journal‘s report noted that it “wasn’t immediately known when the suspension would be announced, and trade experts cautioned that President Trump could still overrule the plans.”

Pressure for tariff reduction has come from big U.S. importers attempting to take advantage of the economic crisis caused by the coronavirus. Many of those same companies will already be receiving large aid packages from the U.S. government and trade hawks point out that there’s no reason companies that have outsourced production of items they sell to American consumers should get additional relief.

A coronavirus tariff reduction would mean companies importing goods from China would get more relief than a company sourcing from Mexico or inside the U.S. Companies that moved production out of China to avoid the tariffs would, in effect, be penalized.