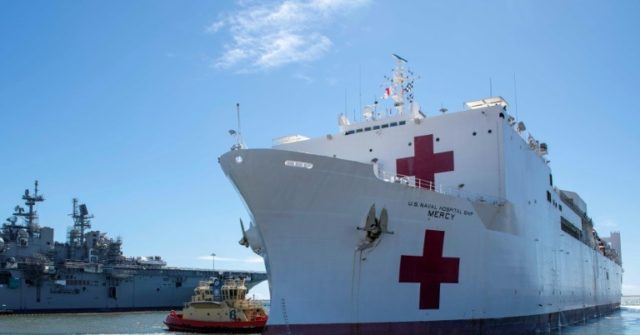 President Donald Trump on Saturday sent off the medical ship USNS Comfort from Norfolk, VA, to New York City to assist in the battle with the coronavirus.

The president described the ship as a “70,000-ton message of hope and solidarity” to the people of New York that was “stocked to the brim” with medical equipment.

“We’re here for you, we’re fighting for you, and we are with you all the way, and always will be,” Trump said. “You have the unwavering support of the entire nation.”

The USNS Comfort will arrive in New York City on Monday. It has 1,000 medical beds, 12 fully equipped operating rooms, and up to 1,200 doctors, nurses, and medical specialists.

The president stood next to Defense Secretary Mark Esper and watched the ship depart as the military band played.
Trump also suggested he was considering a quarantine of New York City and the surrounding areas.

“We might not have to do it, but there’s a possibility that sometime today we’ll do a quarantine — short-term, two weeks — on New York, probably New Jersey, certain parts of Connecticut,” Trump said to reporters at the White House.