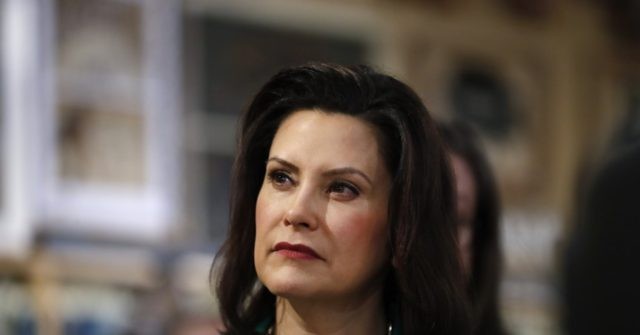 On Monday, Whitmer issued a stay-at-home order in an attempt to curb the spread of the Chinese coronavirus.

“The current trajectory we’re on looks a lot like Italy,” she said in her announcement.

“If we stay our current trajectory, just like Italy, over 70 percent of our people could get infected with Covid-19. Of that seven  million projected, about one million of those would be hospitalized,” she said.

“If Gov. Whitmer truly believes there’s going to be one million Michiganders in the hospitals, why isn’t she building hospitals?” Gruber wondered to Breitbart News.

He noted if Michigan follows Italy’s fatality rate of 9.5 percent, by Whitmer’s logic, 660,000 Michiganders will die.

“Her numbers are reckless. Her intent is to be the savior,” Gruber said, adding the governor is attempting to cast herself as the hero when her predictions don’t come true.

According to Gruber, Whitmer is not leading with solutions to the pandemic.

“Anything Ohio Gov. Mike DeWine did, Michigan did 24 hours later,” he said.

Plain and simple, “Whitmer is jockeying to be vice president of the United States” on a Joe Biden ticket, Gruber told Breitbart, which is spurring her “knee-jerk” reactions to Trump and his administration.

On Thursday, Whitmer responded to a swipe by President Trump on Twitter.

Hi, my name is Gretchen Whitmer, and that governor is me 👋

I’ve asked repeatedly and respectfully for help. We need it. No more political attacks, just PPEs, ventilators, N95 masks, test kits. You said you stand with Michigan — prove it. https://t.co/FtWlTLZdqW

Trump said he’s having problems with “the young, a woman governor, you know who I’m taking about, from Michigan.”

“I’ve asked repeatedly and respectfully for help. We need it,” she wrote on Twitter. “No more political attacks, just (personal protective equipment), ventilators, N95 masks, test kits,” she said, adding, “You said you stand with Michigan — prove it.”

Gruber doesn’t believe Whitmer has acted like any other of the Democrat governors, who are typically opposed to Trump.

He noted New Jersey Gov. Phil Murphy has praised Trump after the federal government worked to help the state set up field hospitals.

“I’m extremely grateful, and I want to repeat this, to President Trump, to FEMA, for making the field medical stations available to us,” Murphy said on Wednesday.

“We all have heard New York Gov. Andrew Cuomo say this president is doing everything we have asked,” Gruber said.

He noted Whitmer was selected to give the Democrat response to Trump’s State of the Union address.

“The Democrats are desperate to win back three Midwest states they lost in 2016: Wisconsin, Pennsylvania, and Michigan,” Gruber said.

“The Democrats scheduled their convention in Milwaukee. Biden claims his hometown is Scranton, Pennsylvania, and a vice presidential nominee from Michigan is the trifecta,” he said.

That, according to Gruber, makes Whitmer the natural nominee to join a Biden ticket.

“I wonder why others are so willing to believe the worst about the country, the future, and even worse about themselves and their neighbors,” Gruber wrote on his website.