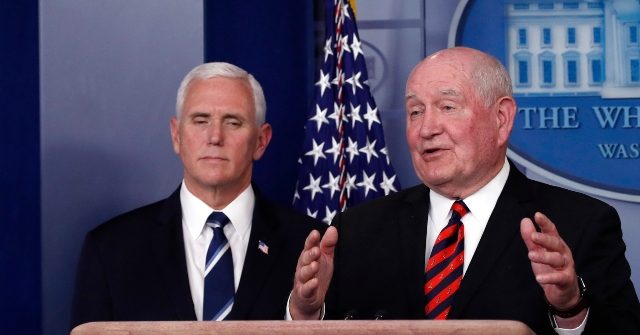 U.S. Department of Agriculture (USDA) Secretary Sonny Perdue, a member of President Donald Trump’s cabinet, told Breitbart News this weekend that the “real modern-day heroes” fighting the coronavirus crisis are those making sure food supply chains are up and running through this prolonged national shutdown.

Perdue, a member of Vice President Mike Pence’s White House Coronavirus Task Force, on Friday evening joined the team at the daily briefing in the White House Briefing Room to break down a new program that the USDA has put together to make sure kids nationwide are getting breakfast and lunch even though many schools are closed.

“Many people may not even know that it’s the U.S. Department of Agriculture who works with our local and state partners to facilitate our school lunch program among all the schools in our country,” Perdue said on Breitbart News Saturday on SiriusXM 125 the Patriot Channel. “We procure the food, and we have regulations about what they can serve—nutrition and all that—we work with them closely.”

“It’s challenging when schools are not there, but these kids are not getting that breakfast or lunch and sometimes, as you know, sadly it may be the only real nutrition they get during the day,” he explained. “What we’ve done is work with waivers for any program like this has to be done by regulation. We’ve been as flexible as the law allows in waivering many of these requirements at our schools for our school lunch professionals and our nutrition people that we deal with on a regular basis in the states. So we’re really allowing parents to come pick up meals, they’re grab-and-go at these congregate sites where they’re not allowed to congregate any longer, so we’re allowing them to pick up meals at any time and many other waivers that they’re usually constrained by have been waived almost immediately by the USDA.”

At the White House on Friday evening, standing alongside Education Secretary Betsy DeVos and Pence after Trump finished speaking and taking questions, Perdue announced the rollout of a new program designed to deliver lunches and breakfasts to children in rural areas whose parents might not be able to pick them up during the crisis. Logistics company McLane Global, whose CEO Benton McLane joined the Task Force in the Briefing Room, is spearheading the effort. Panera Bread’s CEO Niren Chaudhary also joined the Task Force for the briefing to roll out an effort his company is launching in Ohio to get lunches to kids there.

“Many of these kids live in really remote areas,” Perdue told Breitbart News. “While we’ve found that Amazon can get to all of them, we were not getting to all of them with our food and school lunches and breakfasts. Based on the partnership you heard from Denton McLane last night from McLane Global — it’s a logistics company and it’s partnering with Baylor University’s collaborative on hunger and poverty along with Pepsico to provide resources as well – they are packing meals, it’s going to be up to a million meals a week for kids in our rural areas, all they have to do is call or email the mealsforyou.org at Baylor University and if their school is registered as a rural system, then those meals will be delivered to their doorstep.”

Companies such as @McLaneGlobal @PepsiCo and @BaylorCoHP have partnered with @USDA @SecretarySonny to provide 1 million meals for children during the #coronavirus #pandemic! Listen to the full interview on @BreitbartNews Saturday On Demand! pic.twitter.com/V9zgyDKB6y

Perdue explained that these programs from McLane Global and Panera are a “great example” of Trump’s “Whole of America” approach to combatting coronavirus.

“It’s a great program and it’s a great example of what the president talks about with the ‘Whole of America,’” Perdue said. “He knows that while the federal government is big, it can’t do everything. That’s been the great thing about this crisis is the private sector has stepped up in so many ways. The CEO of Panera Bread there, they’re serving approved-type lunches—nutritious lunches—approved by our food and nutritious services, and changing their menu in order to pack these lunches and deliver them to school kids in Ohio and hopefully reaching out beyond Ohio at some point if this crisis continues. These are great examples of people who are doing good for America, and we got many others who are anxious to put together partnerships like that as well.”

Perdue said that the “spirit of America” is shining through the crisis. He said that it is evidenced by supermarkets and every element of the food supply chain kicking into high gear to deal with a sudden surge in demand at the beginning of the Task Force’s rollout of the original 15-day plan that has now been extended to the end of April.

“It’s that spirit of America that really comes through in times like this when we’re challenged, when oftentimes we don’t get a chance to display that,” Perdue said. “Oftentimes, our farmers and ranchers do that all the time and that’s another thing that has just been, has just had a calming effect. Remember the first couple days when everyone was acting like we were having a national hurricane? The demand at grocery stores overwhelmed them, and we had some barren shelves. But just to see how strong the supply chain is is amazing, all the way from the people who are supplying the farmers all the inputs they need to grow this food, and they’re growing it along with the people who are processing it—the inspectors are inspecting it, the drivers who are transporting it, and the processors who are processing it and then those who are stocking the shelves and checking out our customers. I was in the grocery store yesterday and it was amazing to see those shelves stocked. I think we’re past the main, and if people continue to use what they need as they ordinarily would I think we’re in great shape.”

The overwhelming surge has calmed now, Perdue said, adding that he and the Trump administration are appreciative of the role that everyone at every stage of the critical production of the nation’s food supply has played in keeping American stores full. Everyone from the inputs to farmers and ranchers to processors and inspectors to truckers to supermarket employees, Perdue said, deserve the nation’s thanks.

“It’s sound and it’s stable and I think if you go to the grocery stores and see I think the calmness has reappeared,” Perdue said. “People are working. I just want to thank all those people, the whole supply chain from those that make the inputs to producing our food to farmers and ranchers who grow our food to those who process, inspect, and deliver—and stock—all those people are the real heroes. They have not telecommuted. They have been on their jobs because you can’t telecommute when you do those kinds of things. While many in other jobs telecommute when they can and keep safe, these are the people who have been on the front lines and they’re the real modern-day heroes. Anxiety is an amazing thing, it’s really paralyzing and you don’t see our grocery store shelves. You know, we’re mostly spoiled as consumers in this country because most of the problems in grocery stores in this country is choice shopping, not whether it’s going to be there or not.”

Perdue added, too, that the president wants to get America moving on the broader economic side again as soon as possible but that the nation’s health comes first.

“That’s America, that’s the spirit of America. That’s what President Trump has led us into,” Perdue said. “Obviously, as a businessperson, he’s very anxious to get this economy back up running again. We’re not going to let this virus paralyze us for very long. We want to keep safe, we want to stay healthy—that’s the first priority. But I think these people who are cooped up, they want to get back to work and be productive like we had been. This economy was roaring and it will again, it’s just this unusual pandemic that no one could anticipate.”