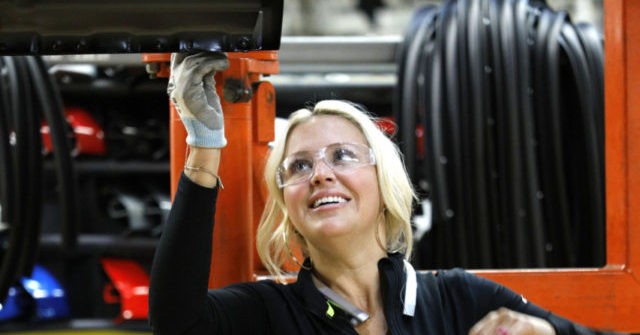 America’s industrial might is being marshaled to fight the coronavirus.

Ford announced Monday that it is partnering with GE Healthcare to build 50,000 ventilators in Michigan in 100 days. The critical care devices will be built by United Autoworker union members that Ford’s Rawsonville Components Plant in Ypsilanti, Michigan.

The plant will produce a simplified ventilator design licensed by GE Healthcare from Florida-based Airon Corp.

“The Ford and GE Healthcare teams, working creatively and tirelessly, have found a way to produce this vitally needed ventilator quickly and in meaningful numbers,” said Jim Hackett, Ford’s president and CEO. “By producing this ventilator in Michigan, in strong partnership with the UAW, we can help health care workers save lives, and that’s our No. 1 priority.”
White House Defense Production Act Coordinator Peter Navarro praised the Ford/GE partnership for working on “Trump time.”

“Just as Ford in the last century moved its manufacturing might seamlessly from auto to tank production during World War II, the Ford team is working with GE Healthcare to use its awesome engineering and manufacturing capabilities to voluntarily help this nation solve one of its most pressing problems. We salute that effort and look forward to the first ventilators rolling off the Michigan assembly line in record time – and we’ll be there to salute that milestone,” Navarro said.

Ford said the Rawsonville plant will produce the ventilators nearly around the clock, with 500 paid volunteer UAW-represented employees working on three shifts. At full production, Ford said it will be able to make 7,200 “Model A-E” ventilators per week, a far faster pace than the 3-per day of the equivalent ventilators currently produced at Airon’s Florida facility.

“From the days of Rosie the Riveter, UAW members have stepped up during difficult times in this nation’s history for the good of us all,” said UAW International President Rory Gamble. “Today’s announcement by Ford that UAW employees will make ventilators at Rawsonville is in that tradition.”