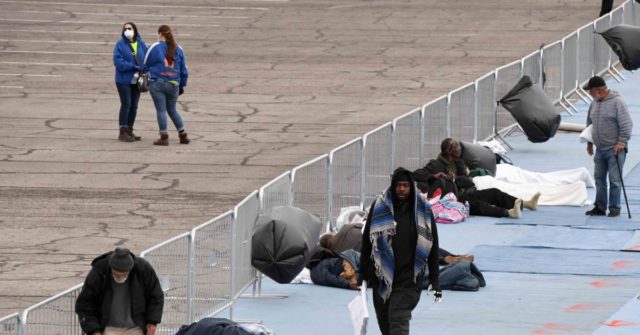 Officials in Las Vegas and Clark County, Nevada moved hundreds of homeless people to an open-air parking lot this weekend after an individual inside a shelter tested positive for coronavirus, posing a risk to other residents.

According to a video published by the Las Vegas Review-Journal, the man had been a resident at a shelter run by Catholic Charities of Southern Nevada. The other residents were moved to a parking lot near the defunct Cashman Center.

The UK Daily Mail noted that roughly 500 residents were relocated to the parking lot, some sleeping on a carpet that had been rolled out on the asphalt, and others sleeping on the asphalt itself, in spaces marked on a grid.

Medical students and professors from Touro University Nevada volunteers to screen homeless people as they entered the parking lot, according to the Review-Journal. Mobile showers were made available to the residents.

The Daily Mail added: “The fully open-air facility, which is open to the homeless from 6pm to 8am, is anticipated to remain until at least April 3 or however long it takes for the Catholic Charities shelter to re-open.”

Caring for the homeless during the pandemic is particularly difficult. Individuals living outdoors may lack access to necessary water, medical care, and sanitation, and may have conditions that make coronavirus particularly risky.

However, CDC guidelines warn against moving homeless people indoors to shared spaces, noting that doing so could facilitate the spread of infection. Unless individual housing units or rooms are available, the CDC suggests expanding services to homeless people living outdoors and encouraging more “social distancing” outside.

There were 1,000 coronavirus cases in Nevada as of Monday, and 15 deaths overall, the Review-Journal reported.