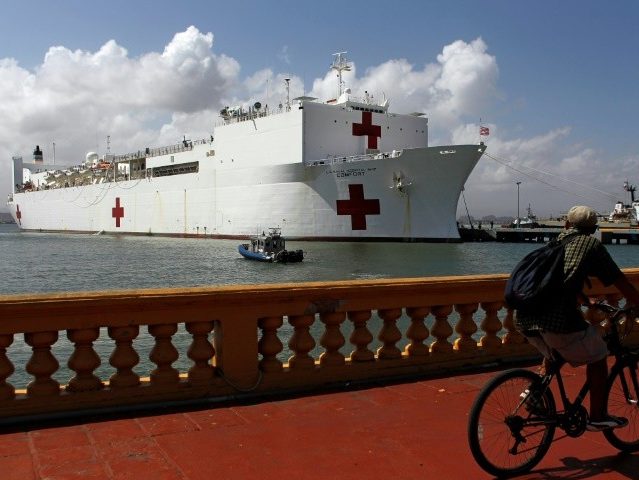 Individuals in New York City disregarded the repeated orders to practice proper social distancing on Monday as a crowd formed to witness the arrival of the Navy hospital ship USNS Comfort.

The USNS Comfort arrived at the New York Harbor on Monday to provide additional relief to hospitals as first responders, medical professionals, and officials in the city continue to battle the outbreak of the virus. The ship is reportedly prepared with 1,000 beds, which are set aside for patients who do not have the virus.

Despite the stringent social distancing orders, crowds formed near Pier 90 to witness the arrival of the Navy ship. Photos show dozens of people taking photos, touching the barrier, and failing to maintain a six-foot distance from others:

Apparently Manhattanites decided that they should crowd up to the river to get a photo of the hospital ship that we desperately need because…of the disease that thrives in crowds. https://t.co/K7a6MLIClz pic.twitter.com/KgQxNdNvGz

According to the New York Post, several NYPD officers stood by as people congregated.

“After members of the City Hall press corps tweeted about the throngs of people, Mayor Bill de Blasio’s communications team directed the NYPD to get the crowds to disperse,” the Post reported.

“The pictures made me realize it was happening and I reported it to detail who got involved,” City Hall spokesperson Freddi Goldstein said, according to the outlet.

“This is a new reality for all of us and we’re all adjusting. The mayor and the police commissioner are in regular contact to make sure our officers understand this new ask of them, as well,” Goldstein added.

Mayor Bill de Blasio announced over the weekend that the city will be taking drastic measures to curb the spread of the virus, including imposing fines of up to $500 to those who violate social distancing orders.

“They’re going to give people every chance to listen, and if anyone doesn’t listen, then they deserve a fine at this point,” de Blasio said at his press conference on Sunday.

“I don’t want to fine people when so many folks are going through economic distress, but if they haven’t gotten the message by now and they don’t get the message when an enforcement officer’s staring them in the face …  that person then deserves the fine,” he added.