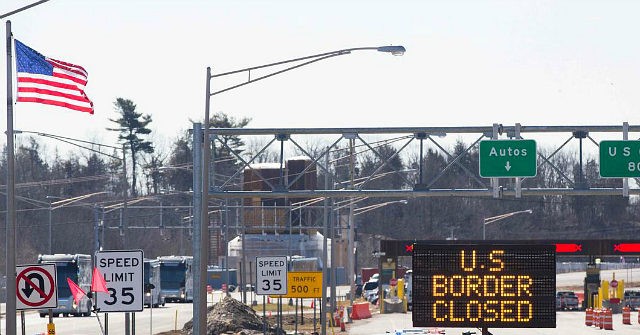 President Donald Trump’s border reforms are helping the Department of Homeland Security to eject most southern migrants in just 96 minutes, according to a report in the Washington Post.

“Migrants who cross into the United States illegally are being expelled to Mexico in an average of 96 minutes under emergency coronavirus measures now in force across the U.S. southern border, according to three U.S. officials with knowledge of the latest government statistics,” the newspaper reported Monday. The report said:

Under the new rules, U.S. agents are processing migrants from Mexico, Guatemala, El Salvador and Honduras “in the field” before they are able to set foot inside a U.S. Border Patrol station. The migrants are then whisked back to the border and sent into Mexico.

The flow of unauthorized border crossings has plunged since the emergency measures were implemented on March 21, down from more than 1,000 per day to fewer than 600 on Sunday, the latest statistics show.

Trump’s border reforms include the “Remain in Mexico” program, the transfer of asylum-seeking migrants to Central American countries, and additional curbs imposed during the coronavirus emergency.

The fast-exit rules do not yet apply to migrants from outside America, such as African and Indian immigrants. They comprise roughly 15 percent of arrivals, the Post said.

The medical curbs are also helping to block the flow of so-called “Unaccompanied Alien Children” (UAC) who are brought to the border by coyotes.

Most of the UACS are the children of Central American illegal immigrants who are living in the United States. The pipeline was created by a 2008 law, which created a different set of regulations and rules for the under-18 UACs migrants. Officials are now quickly returning some of the UACs back to their home countries.

However, Trump’s successful effort to block the blue-collar migration from southern countries has not been applied to the white-collar “guest workers” programs, such as the H-1B program.

The white-collar programs are continuing amid the coronavirus pandemic, partly because CEOs and investors believe the visa worker programs boost stock prices by helping them save billions in salaries.