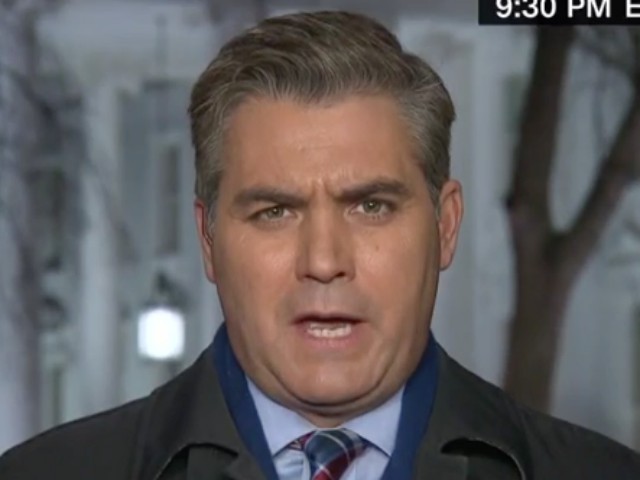 He said, “Anderson, I will tell you in seven years I have covered the White House, that is the most stunning briefing I have ever sat through. To have public health officials come in and try to explain to the American people that they need to come to grips with the fact – or the very strong likelihood that we’re going to see 100,000 to 200,000 Americans die over the next couple months from the coronavirus. I have to tell you — it was just downright chilling.”

Acosta continued, “I will say in terms of what the president was saying in the briefing room, this was President Trump changing his tune on the coronavirus. At one point he said it’s not the flu, it’s vicious. That’s after he has compared it to the coronavirus in the past. You mentioned just a few moments ago where he was advising that Americans perhaps start wearing scarves because of these recommendations that are starting to come from people like Dr. Fauci that perhaps wearing masks in public might be a good idea. At one point, the president said we’re about to enter a ruff two-week period. This is just a stark contrast from what the president was saying a couple of weeks ago and how he’s been describing this coronavirus all along.”

Acosta added, “The other thing I think needs to be pointed out, at one point the president, when I asked him, you know, could we have mitigated this a lot better? Could we have reduced the number of people facing, you know, the possible likelihood that they may die over the next couple of months? The president said, you see what happens when you get off to a late start? He was pointing the finger at that point at New York state and other areas that weren’t really mitigating very strongly at first. But, Anderson, the same thing could be said of the president. He got off to a late start because of the way he was telling people that this was going to go away, that this was going to miraculously disappear, and so on. I tried to press the president on that at a number of points, and he said, you know, when he was pressed on this, he said he simply wanted to keep people in good spirits, that he didn’t want to be somebody who was passing along bad news and he wanted to be an optimist and so on. But I have to tell you, Anderson, I’ve never seen President Trump like this. I know people might say, well, you know, I can’t ever trust him. He’s a phony and so on. People may say that. Anderson, I have to tell you sitting in that room that close to him, I’ve never seen President Trump like this. I think, to some extent, he is scared right now, Anderson, and we could all feel that in the room.”

“I think there are going to be so many lessons learned moving forward, Anderson,” Acosta said. “The stark message we got in the briefing room this evening is unmistakable. This country is about to go through a horrendous, terrible experience, and I have to tell you, people may not believe the president when he says any of this, and I have been — you and I’ve been, you know, pretty critical of him from time to time. This was a different Donald Trump tonight. I think he gets it, Anderson.”