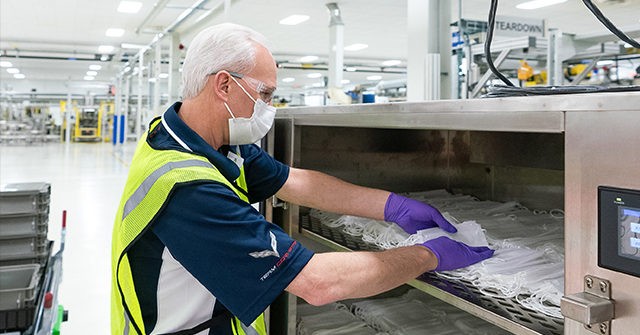 General Motors (GM) is reopening its Warren, Michigan, transmission plant, which it idled last year, in order to begin producing about 1.5 million face masks a month to supplement the shortage caused by the coronavirus pandemic.

With the reopening and retooling of the Warren plant, GM hopes to produce 20,000 level one face masks by April 8, and, when operating at full-scale, to produce 1.5 million masks a month or about 50,000 masks a day.

Level one face masks are not as protective as the N95 masks worn by medical professionals that filter out 95 percent of particles. The masks GM is producing cannot be worn in surgery, but can be used by delivery workers and other non-medical support staff involved in the coronavirus response efforts.

GM spokesperson Monte Doran told the Detroit Free Press that the company is hoping to acquire the expertise to produce N95 masks once it masters level one production.

“We are exploring how to produce N95 masks, the highest level filtration mask produced. We just aren’t there yet. The team felt the level one masks are something we could immediately get into production and start producing as fast as possible,” Doran said.

GM will hire at least about 24 UAW union workers to help make the masks in addition to the workers who have already helped gut the facility to retool it as a mask assembly plant.

Last year, GM idled the Warren plant — laying off 335 American workers, as well as being responsible for the layoffs of about 16,000 in the state’s supporting industries. The closure of the plant was just one component of CEO Mary Barra’s plans to shutter four U.S.-based plants.

As Breitbart News has reported, American manufacturers have warned that materials for supplies like masks, ventilators, gloves, and circuit boards may continue to be sourced out of China without an executive order incentivizing the use of American-made materials.