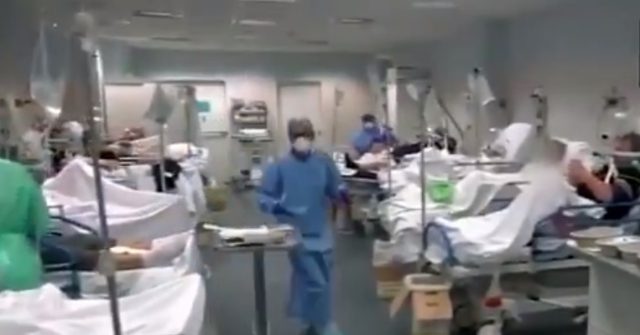 “It was an editing mistake. We took immediate steps to remove it from all platforms and shows,” CBS News told Fox News.

Gimme a break… I’ll address that nonsense in a bit.

The footage aired last Wednesday during CBS This Morning, which thankfully means not many people saw it. The fraud was apparently discovered by citizen journalists online. Tweets like this one were all over the place exposing CBS News’ attempt to make it look as though American hospitals were already inundated and overwhelmed.

The grim footage shows a roomful of sick patients who look like they’re hooked up to ventilators.

What kind of fools does CBS take us for?

Layers and layers of fact-checkers, they tell us…

We’re totally unbiased, they tell us…

Am I the only one who’s noticed how these so-called “mistakes” only ever fall in one direction?

There is nothing the corporate media want more than for the coronavirus to overwhelm our hospitals so they can point in November and scream, “DON’T VOTE FOR THE ORANGE BAD MAN!”

And that’s why these mistakes only ever fall one way: in favor of the fake news media’s anti-Trump agenda.

Has the media ever made a mistake in Trump’s favor?

No. But you already knew that.

Look at the legion of coronavirus lies we have already caught the establishment media spreading, and now we’re supposed to believe this was just — oopsies! — an editing error.

Yes, an editing error from the same CBS News that straight-up lied about Trump telling sick people to go to work.

An editing error from the same CBS News that promotes blacklists of words like… “blacklist.”

An innocent editing error from the same CBS News that falsely claimed there were more mass shooting in 2019 than there were days of the year.