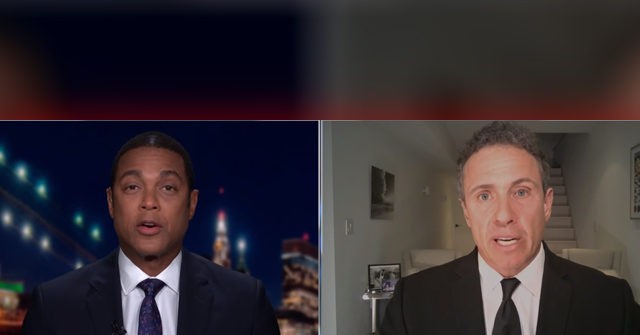 During the transition between CNN’s “Cuomo Primetime” and “CNN Tonight” on Monday, CNN hosts Don Lemon and Chris Cuomo disagreed over whether news networks should carry the White House’s press briefings live.

Lemon said, “I’m not actually sure, if you want to be honest, that we should carry that live. I think we should run snippets. I think we should do it afterwards and get the pertinent points to the American people. Because he’s never, ever going to tell you the truth. And guess what he’s going to do? If you ask a question that is a legitimate question, and if he doesn’t like the question, he is going to say whether it’s — whether you’re being mean or not or whatever he wants to call it, he is going to say, that is a mean, nasty question. … Those press briefings have become his new ‘Apprentice.’ They’ve become his new rallies.”

Cuomo responded, “I understand the frustration with his messaging.”

Lemon replied that he wasn’t advocating ignoring the briefings altogether.

Cuomo then stated, “I’m saying play all of it. I want to hear everything he has to say. I want it all to be out there and I want him to be held to account. Because this isn’t BS politics right now. It’s not about nicknames. It’s not about what he can call another party.”