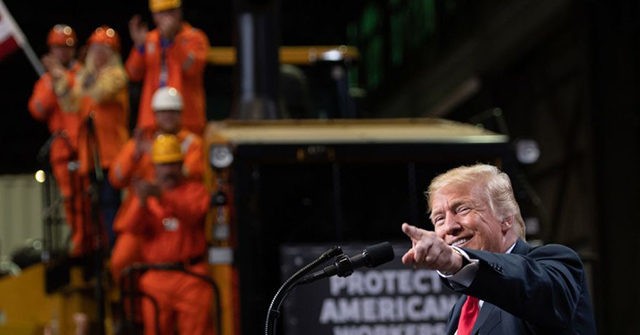 President Donald Trump’s Paycheck Protection Program (PPP) through the Department of Treasury and Small Business Administration has already on its first day pushed out more than $620 million to small businesses nationwide mostly through community banks.

A senior Treasury Department official told Breitbart News on Friday morning that as of 10:30 a.m. eastern time, a total of 1,652 loans were given out through 239 different banks for a total of $628,371,561. Most of the big banks like JP Morgan Chase, Wells Fargo, and Citigroup did not have programs online—only Bank of America did—early Friday morning, so this means community banks nationwide are the ones stepping up to push the money out to small businesses affected by the coronavirus crisis.

It’s worth noting too that given that community banks are the ones stepping up to help small businesses—and that they’re doing it at such a rapid pace on the first day of the program—that this counters the narrative from some on the left and in establishment media that somehow the efforts of Trump, Treasury Secretary Steven Mnuchin, and the broader administration were designed to only help big corporate cronies. Friday, as Mnuchin and Small Business Administration administrator Jovita Carranza announced at the White House Coronavirus Task Force briefing on Thursday night, is the first day these funds are going out to small businesses nationwide through banks across the country. The Paycheck Protection Program, or PPP, passed as part of the $2.2 trillion phase three coronavirus relief package that Congress passed last week.

Since this money is going directly to small businesses across the country, and since it’s mostly flowing through small community banks it is significantly boosting communities and main street across the country rather than Wall Street. “This is the Main Street rescue, not a Wall Street bailout,” the senior Treasury Department official added.