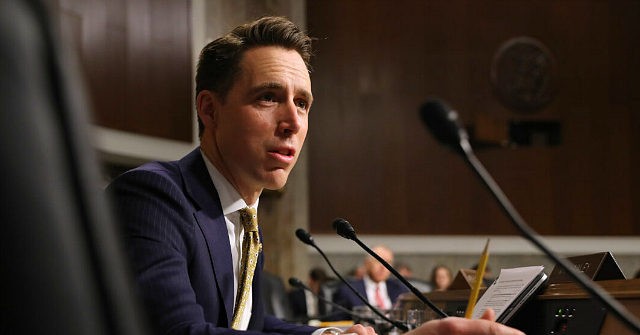 Sen. Josh Hawley (R-MO) proposed his phase four coronavirus plan on Friday that would put Americans back to work and bring back American manufacturing to the United States.

Hawley released a proposal that would serve as the outline for a phase four coronavirus bill that would halt the economic damage of the coronavirus outbreak and to revitalize the economy by bringing back the American supply chain to the United States.

The Department of Labor (DOL) announced that the unemployment rate rose to 4.4 percent due to the coronavirus. Hawley’s outline could serve as a template for a phase coronavirus bill to revive the economy and provide a path for America to revitalize its manufacturing sector.

Hawley wrote that his proposal would insulate America from future supply chain crises that might arise in the future.

Hawley detailed in the proposal:

As layoffs mount, the time has come for bold action by the federal government to halt the damage to American workers and position the American economy for a comeback once the nation has defeated COVID19. This effort should include a major initiative to rehire workers now—and to keep them on payroll for the duration of this crisis. And it should include new measures to bring critical supply chains back to this country from China and elsewhere and to encourage domestic production.

The rationale is simple. Workers should not be forced into unemployment because of the government’s health measures prompted by this crisis. Workers should be able to keep their jobs, and be ready to get back to work as soon as practicable.

Hawley’s legislation would offer immediate payroll support for the duration of the coronavirus outbreak by:

The Missouri senator’s legislation would also promote long-term growth by bringing back crucial supply chains from China. The proposal would:

The Missouri senator wrote that the country should be held hostage by China for its supply of medical equipment and pharmaceuticals. He wrote:

Never again should the American people find themselves vulnerable to the Chinese Communist Party for critical medical supplies and industrial components in a moment of crisis. Congress must immediately enact new local content requirement rules, requiring that manufacturers of finished products procure higher percentages of their inputs over time from domestic suppliers, for all industries essential to crisis response, chief among them medicine and medical equipment. Such requirements should be coupled with crisis export controls that prevent American firms from sending equipment like ventilators overseas just as they are most needed here at home, as well as generous investment subsidies to assist firms struggling to source domestically from third parties but willing to build out input production themselves.

Firms across a wide range of industries have learned from the recent global supply chain disruptions that their operations are hostage to events far beyond their control so long as they rely on foreign countries for the production of critical inputs. As capital floods to the United States, federal policy should direct that investment toward rewarding firms that take this moment as an opportunity to invest in capital expenditure for new domestic production facilities with federally-backed, low-interest capex financing.

“The moment for action is now,” Hawley concluded in his proposal. “It’s time to end the partisan bickering over special interest giveaways and ideological wish lists. There can be only one priority now: facilitating the American comeback.”