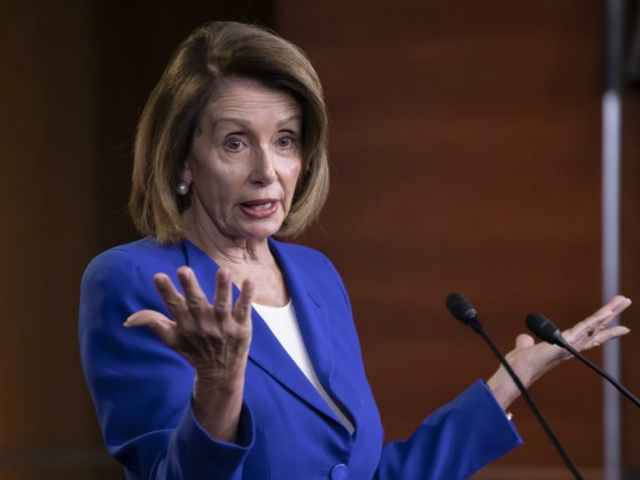 House Speaker Nancy Pelosi (D-CA) signaled that she is easing up on what appeared to be her original intention of packing the next phase of economic relief with a host of progressive agenda items, telling reporters on Friday that the next emergency measure should follow the same model as the last.

Democrats, under the leadership of Pelosi, came under fire last week after delaying the Phase 3 emergency relief measure to pursue their own version, which the speaker packed with what critics referred to as “liberal wish list items.” Those included Green New Deal initiatives, ballot harvesting, requirements for racial diversity data, and a bailout for the post office.

While she ultimately did not get any of those agenda items in the latest relief package, she spent the following days signaling her Party’s intention of packing the next relief bill with similar agenda items. However, she struck a different tone on Friday, telling reporters in the Capitol, “Let’s do the same bill we just did, make some changes to make it current.”

She expressed the same sentiment during an appearance on CNBC.

“We’ve had three bills that have been bipartisan. I think right now we need a fourth bipartisan bill. And I think the bill could be very much like the bill we just passed,” she told the network.

“I’m very much in favor of doing some of the things that we need to do to meet the needs of clean water, more broadband, and the rest of that. That may have to be for a bill beyond this,” she admitted.

“Right now, I think that we have a good model. It was bipartisan, it was signed by the President, but it’s not enough,” she added.

Her remarks represent a drastic shift from her previous position. On Thursday, for example, Pelosi peddled the Democrats’ desire to address voting methods in the next relief bill — something she packed into her own 1,400-page relief measure, which failed to catch steam.

She said during Thursday’s broadcast of CBS’s Late Show:

“It is absolutely essential at this time. … So, in this next bill, we hope to get more resources to vote by mail,” she added. “And if you’re doing that, you have to have funds for the Postal Service as well, which he has objected to.”

Majority Leader Mitch McConnell (R-KY) has sharply addressed Pelosi’s political posturing, instructing her to “stand down on the notion that we’re going to go along with taking advantage of the crisis to do things that are unrelated to the crisis.”

While the speaker’s remarks on Friday represent a demonstrative shift in tone, a source close to Pelosi told Politico that “nothing is set in stone as Democrats have yet to even draft a bill.”