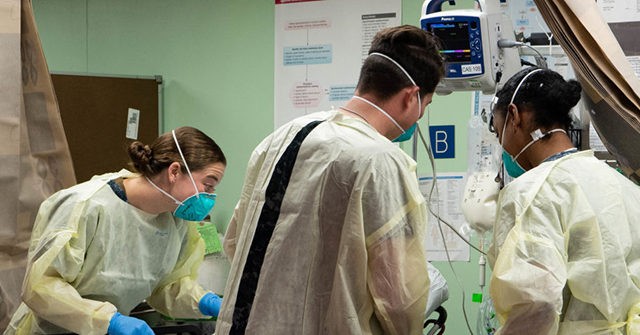 Donald Trump’s presidential campaign has been donating meals to hospitals across the country to feed doctors, nurses, first responders, and other health workers on the front lines of the coronavirus pandemic, according to a report from Fox News.

The campaign’s effort, which has taken place since last Thursday, has provided meals from various restaurants to more than a dozen hospitals in New York, New Jersey, Washington, and Michigan.

One source told Fox News that the campaign hoped to not only assist with those on the front lines but also support local restaurants who may not be receiving much business during the pandemic.

“They’re doing it as a donor who cares,” a source told Fox News. “So nothing politically is tied to it… We’re just trying to, you know, show a thank you.”

According to one source, the campaign has already spent tens of thousands of dollars on the effort, which is said to expand within the coming days.

As part of the donations, Fox News was able to confirm that an anonymous individual with the campaign had placed an order at Giovanni’s Italian Deli in Secaucus, New Jersey, to be delivered to Hudson Regional Hospital.

“They only told us their first name,” a Giovanni’s employee told Fox News. “They called us, and they had us donate meals for the nurses and doctors — an assortment of things, 40 platters of pasta, salads, sandwiches.”

The manager of Antonio’s Trattoria spoke with Fox News and said a man called the restaurant earlier this week to place “100 individual orders” to be delivered to Lincoln Hospital in the Bronx.

“It was 20 penne vodkas, 20 pastas with tomato sauce, 30 chicken parmesans, and 30 house salads with grilled chicken,” the manager told Fox News. “He only gave his first name and said he wanted to remain anonymous.”

“That’s awesome. That’s great,” the manager said upon learning that the order was placed by the Trump campaign. “That’s really great, thank you.”

An Instagram post from Chit Chat Diner highlighted an “anonymous donation” to be provided to the staff at Hackensack Hospital.

“An anonymous donation providing lunch to some hardworking staff at Hackensack Hospital this afternoon. We are so grateful. #njstrong #prayersforeveryone#wewillgetthroughthis #letsallbewell#stayhome  #stayhealthy”