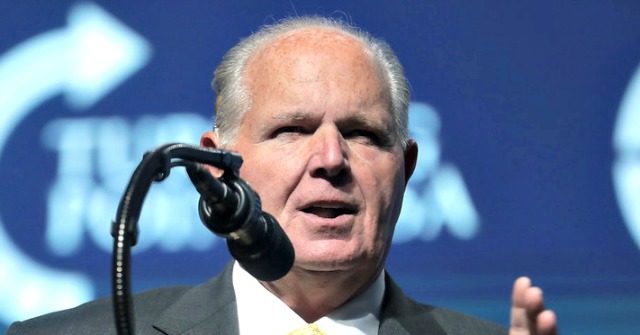 Conservative radio host Rush Limbaugh warned Americans Thursday during his broadcast of the Democrats’ attempt to use the crisis of the coronavirus as a means to “decapitate the U.S. capitalist economy”:

Limbaugh said it is capitalism that is saving the country today. The popular host observed, for example, that by reversing net neutrality, the U.S. saved Internet connectability for emergency periods such as the one the nation is experiencing:

And, by the way, thank God for getting rid of net neutrality, because if we hadn’t gotten rid of net neutrality and if there were all kinds of these left-wing regulations on the Internet, it wouldn’t be up and running as it is today. Go to the U.K., go to the European Union, you’ll find out that the Internet and broadband service over there has been greatly interrupted in all this. Because they have massive more regulation of the Internet than we do.

Limbaugh criticized the left-wing media for joining with Democrats in portraying the current rise in unemployment as a failure of the Trump administration.

He observed MSNBC’s Andrea Mitchell asked House Speaker Nancy Pelosi (D-CA): “Do you think more needs to be done in the next stimulus package now that we’ve seen these appalling historic unemployment numbers?”

Yes. Yes, indeed. And not only do I think so. You can just ask the Democratic and Republican governors. I’m very proud of my governor, Governor Gavin Newsom in California. In this bill we want to include some infrastructure that directly relates to the coronavirus crisis. For example, clean water. Clean water is a very important part of our infrastructure proposal. Community health centers. There’s funding for additional money for construction, rehabilitation, et cetera, of community health centers. Internet, broadband. Look at how we’re all dependent. And then the grid that makes so much of that possible as part of that.

“Yeah, the grid. The grid’s electricity,” Limbaugh reacted to the clip:

You people tried to shut it down with your Green New Deal. What do you mean? You’re the biggest hypocrite that’s come along during this crisis. Clean water, who the hell is opposed to it? What do you mean we need clean water initiatives in the infrastructure bill? Is there anybody out there in favor of dirty water? Who is opposed to this?

I think the fate of free market capitalism is on the line right now and that the administration and Big Business have got to show the American people that this is the best system. This, to me, is the moment of truth when capitalism is being tested, and it is your administration — you and President Trump — that have gotta prove that it is the best way to go about life.

Imagine there’s no countries
It isn’t hard to do
Nothing to kill or die for
And no religion, too https://t.co/GWFYbveeOE

Pence agreed, responding that farmers and small businesses are shining stars during the current crisis:

“I am so glad that he mentioned this to the vice president,” Limbaugh said. “He’s exactly right — and coming on the face of Gavin Newsom in California. The fate of free market capitalism is on the line right now, and we have shut it down.”