It’s been 20 years since we first met Pink.

When her debut album Can’t Take Me Home arrived on the scene on April 4, 2000, it heralded the arrival of pop music’s biggest rebel. Executive produced by L.A. Reid and featuring writing and production from, among others, Kenneth “babyface” Edmonds and Kandi “Future Real Housewife” Burruss, the R&B-influenced album included hits like “There You Go,” “Most Girls” and “You Make Me Sick” and peaked at No. 26 on the U.S. Billboard 200, with the lead single giving her a Top 10 hit on the Hot 100 on her very first at bat.

While her sound would morph over the years, with Pink bristling at both the look and sound Reid insisted upon at the start as she took control and developed the spunky dance-pop sound that would become her calling card over the years, it was clear from the jump that she was a star. And since her debut, she’s only proven that, selling over 90 million albums worldwide, winning three Grammys, and even taking home the People’s Champion Award at the 2019 E! People’s Choice Awards.

In celebration of two decades of pop music’s most outspoken, inclusive and almost supernaturally athletic stars, take a look at 20 of the most fascinating facts from a career and life like no other.

1. Born Alecia Moore, the pseudonym Pink was first born out of an embarrassing moment at camp, but later came to life as a reference to a Reservoir Dogs character. It’s just a nickname that’s been following me my whole life,” she told CNN in 2001. “It was a mean thing at first; some kids at camp pulled my pants down and I blushed so much, and they were like, ‘Ha ha! Look at her! She’s pink!’ And then the movie Reservoir Dogs came out and Mr. Pink was the one with the smart mouth, so it just happened all over again.”

2. As a precursor to her days as one of pop music’s most acrobatic performers, she trained as a competitive gymnast for eight years, from ages of 4 to 12.

3. By the time she was 14, she’d already begun writing her own songs and had a regular singing gig every Friday night at a club in Philadelphia.

4. She also began heavy experimentation with drugs after dropping out of school, surviving an overdose at just 15. “I was a hard-core partyer from 12 to 15. I was like a candy raver and I was on all the club drugs, selling Ecstasy and crystal meth and Special K,” she told Entertainment Weekly in 2012. Close friend Sekou Harris, who died of a heroin overdose when they were only 14, ultimately inspired the 2006 song “Who Knew.” 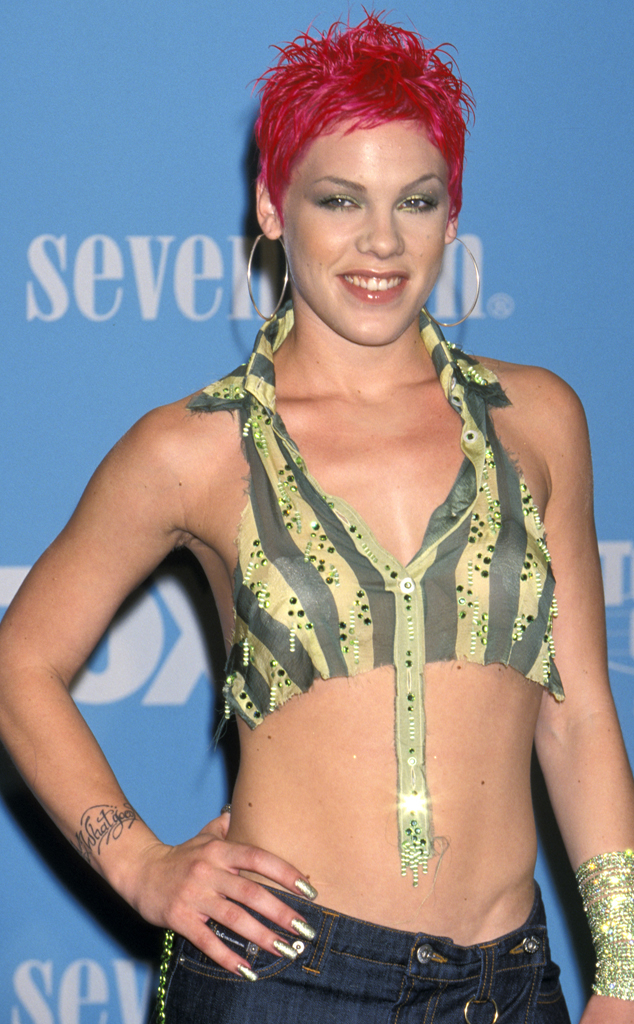 5. In her youth, she worked in fast food. “It was important to my family that I make my own money. I was a drive-through girl at McDonald’s. I had a Janet Jackson microphone—I had power,” she told Food & Wine in 2017.

6. Before going solo, she was a member of several groups, beginning with the band Middleground when she was in high school. At 14, she auditioned for all-female group Basic Instinct and earned a spot, but they disbanded without releasing any material. At 16, she and two other girls formed R&B group Choice, who signed with L.A. Reid‘s LaFace Records. A recorded album was never released, but the song “Key to My Heart” was on the soundtrack of 1996 film Kazaam.

7. An obsession with Madonna at a young age once had her believing she was the pop icon’s long-lost daughter. “I’ve always been the type of person that followed Madonna like a lost puppy. I didn’t speak to my mother for a year, because I was sure she adopted me. I swore that I was separated from Madonna at birth. I liked the fact the she did what she wanted when she wanted to do it,” she told MTV in 2000. She won her first talent show singing “Oh Father.”

8. While she’s made cameos in films like Charlie’s Angels: Full Throttle and Get Him to the Greek, she’s done some legit acting work over the years, as well. Always credited as Alecia Moore, she began acting with a role in the 2007 horror film Catacombs. In 2011, she voiced Gloria in the animated sequel Happy Feet Two. Two years later, she earned rave reviews for her work in the film Thanks for Sharing, for which she shared top billing with the likes of Gwyneth Paltrow and Mark Ruffalo. “Of all the cast here, the least experienced is the pop singer Pink, yet she does the best acting in the film: natural, a little harsh, a little unstable. Pink, like Macy Gray in her Lee Daniels movie roles, knows instinctively how to behave on camera by just pretending that the camera isn’t there,” Dan Callahan wrote of her performance at RoberEbert.com.

9. Madonna and Janis Joplin made the biggest impact on her, but she’s made an impact of her own. Adele credits taking in an early Pink concert as one of the formative moments in her life. “I remember seeing Pink at Brixton Academy,” she told Spinner in 2010. “It was the Missundaztood record, so I was about 13 or 14. I had never heard, being in the room, someone sing like that live. Before that I was into the Spice Girls and stuff like that and they can’t sing obviously. I know that now,” she says. “I remember sort of feeling like I was in a wind tunnel, her voice just hitting me. It was incredible.” 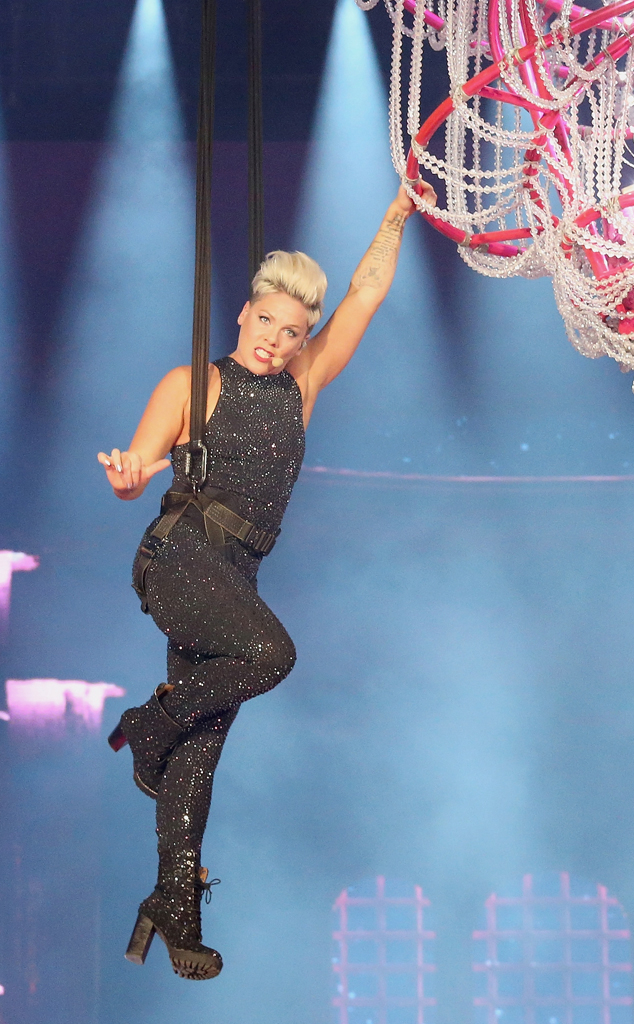 10. Known for her high-flying acrobatics in her live shows, Pink told CBS Sunday Morning in 2017 hat the inspiration for such athletic theatricality came from another legendary pop diva. “I went to a Cher concert and I saw all the dancers, who were doing these incredible silks and I was like, ‘Well, why isn’t a singer doing that? Why hasn’t a singer done this? Why do they get to have all the fun?'” So she met with one of Cher’s aerialists, whom she begged to teach her everything she knew.

11. She’s a vegetarian. Mostly. “I haven’t eaten anything four-legged or cute since I was 15,” she told Food & Wine. “I had also stopped eating chicken, but when my daughter, Willow, was in my belly, she just demanded chicken wings and fingers.”

12. In an interview with five-year-old Madelyn Mannette for W Magazine in 2017, she was asked which of her own songs was her favorite. Her response? “Get the Party Started”

13. Her father, Jim Moore, also writes songs. One he wrote while serving in the Vietnam War, “I Have Seen the Rain,” even appeared on her 2006 album I’m Not Dead.

14. The daughter of divorced parents, many of her earliest songs were inspired by the tough time in her life. And she’s proud of being able to give voice to fans in similar boats. “I accept the challenge that kids are gonna be relating to me more so than a lot of people because I am telling the truth and I’ve been there,” she told ABC News in 2003.

15. A long-time friend of Lisa Marie Presley, she was given a bulldog by her pal which she named Elvis in honor of her late father.

16. After meeting professional motocross racer Carey Hart at the 2001 X Games in Philadelphia, she proposed to him during a 2005 race at Mammoth Lakes, Calif. While assisting him in the race, she wrote “Will You Marry Me? I’m Serious!” on a pit board. After initially missing the sign and completing another lap, he veered off the track and accepted on the spot. She then made him finish the race. 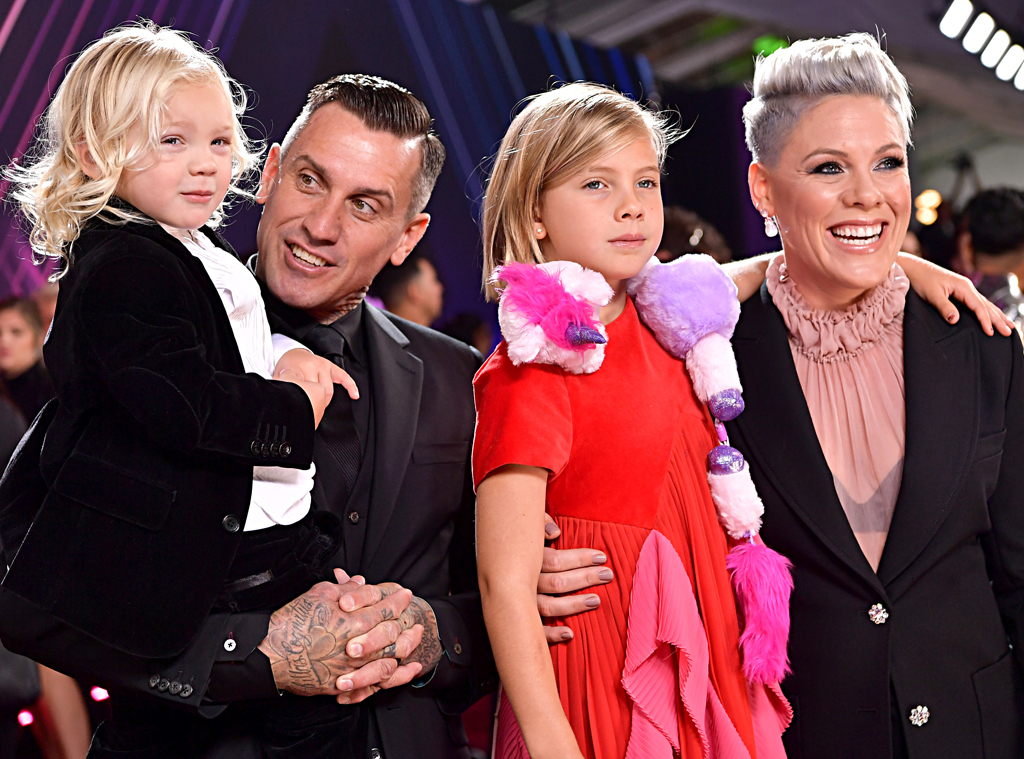 17. The couple famously separated for two years from 2008-10. Her hit song “So What” was written about the separation and he graciously appeared in the video. Nine months after reuniting, she announced her pregnancy with their first child on The Ellen DeGeneres Show. Daughter Willow Sage arrived in June 2011. Jameson Moon, their son, followed in December 2016.

18. Since 2015, “Today’s the Day,” a song she wrote specifically for this reason, has served as the theme song for The Ellen DeGeneres Show.

20. Despite winning a Grammy together, her time working on “Lady Marmalade” alongside Mya and Lil’ Kim for the Moulin Rouge soundtrack ignited a feud with Christina Aguilera that Pink claims once involved the “Dirrty” singer once trying to punch her. “She swung on me in a club, which was hilarious,” she told Andy Cohen during a 2017 Watch What Happens Live appearance. “I was like, ‘What’s happening right now,'” she said of the moment, laughing. “‘What are you…What’s happening?'” In a 2019 appearance of her own on the show, Xtina refuted the claim and said they’d played spin the bottle instead. Regardless of their differing recollections, the two officially quashed their beef back in 2016 when they reunited on The Voice.