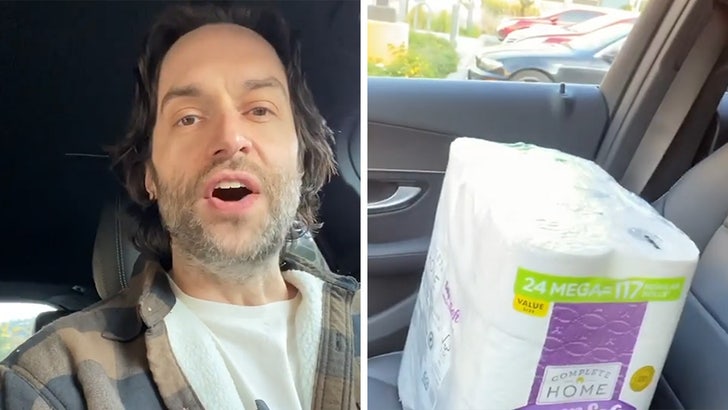 Chris D’Elia has a wild tale that’s almost too funny to believe … a local cashier hooked him up with toilet paper ’cause of his celebrity, treating perforation like precious pounds of pot.

The comedian took to Instagram Saturday with his story, telling his followers that he casually strolled into an L.A.-area store — didn’t say which one — and asked the dude at the front if they had any toilet paper in stock … a question that’s become all too common these days.

Chris says the guy started acting super shady, and then led him to the back of the store … where he claims he emerged with a 24-pack of top-notch TP, which was clearly being hidden/hoarded from the general public. The guy allegedly told Chris he was a big fan.

Not just that … but Chris says the fella gave him the whole pack for free — how ’bout that?!? As CD puts it … he’ll be sh***ing pretty for weeks to come. Hooray!!!

Chris says he knew his comedy would pay off at some point, and it sounds like it has during these most trying of times. And, as far as toilet paper becoming just as coveted as drugs … something like this has been predicted before by the great Robin Williams.

If Chris’ story is true and he’s not just working out new material, we are officially in the peak of ass-backwards times.