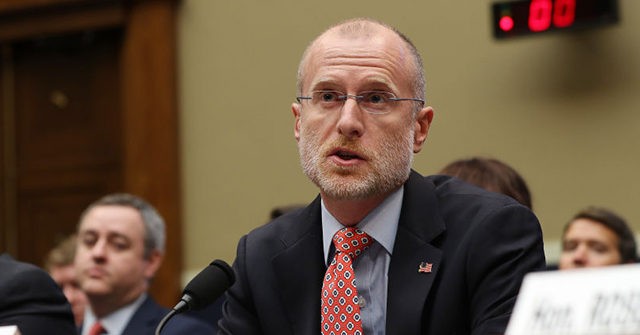 Federal Communications Commission (FCC) Commissioner Brendan Carr told Breitbart News in an exclusive interview on Friday that Free Press has moved to “weaponize” the FCC against broadcasters and conservatives to stifle political speech.

Progressive media group Free Press has petitioned the FCC to censor broadcasters from showing President Donald Trump’s press conferences on the coronavirus pandemic. In its petition to the federal agency, the group called it a “life and death issue.”

“When the president tells dangerous lies about a public health emergency, broadcasters have a choice: don’t air them, or put those lies in context with disclaimers noting that they may be untrue and are unverified,” Free Press wrote. “And certainly the FCC has a duty to rein in radio broadcasters that seed confusion with lies and disinformation.”

Carr called this petition a “dangerous” attempt to weaponize the FCC against free speech. He noted that while this proposal may not pass through the Republican-controlled FCC under Trump, it may gain more traction under a future Democrat administration like how Free Press lobbied former President Barack Obama and the then Democrat-controlled FCC to pass net neutrality.

“It’s a dangerous and sweeping attempt by the left to weaponize the FCC against broadcasters and conservatives and politicians. The real danger here, among other things, is that this particular group is very influential in Democrat media and telecom policy circles. You can look at this petition and say this isn’t going to get traction with this FCC, but remember when it comes to greater government control of the Internet, it’s called net neutrality,” Carr said. “That group was at the vanguard of pushing utility-style regulations and heavy-handed regulation of the Internet [net neutrality] at a point in time that people on the right and the mainstream left thought it was a third-rail issue and that the FCC would never do. And what did they do? They campaigned to flip then President Obama, who then flipped the FCC, and we ended up for a long time what was unthinkable — heavy-handed government control of the Internet.”

Free Press cofounder and board member Robert McChesney has advocated for a socialist revolution in the United States.

“In the end, there is no real answer but to remove brick by brick the capitalist system itself, rebuilding the entire society on socialist principles,” McChesney said at one point.

McChesney also said, “We need to do whatever we can to limit capitalist propaganda, regulate it, minimize it, and perhaps even eliminate it.”

Carr also noted that Free Press has called for a “fully-funded, government-funded media. And so when I think you put that all together, it’s part and parcel of an effort to control the political narrative and complete intolerance of any views that don’t fit with their orthodoxy.”

“This is part of the broader left to take advantage of the pandemic to press their extreme agenda. We’re seeing it here with this petition and asking the FCC to shut down speech and broadcasters that doesn’t fit their orthodoxy, and we’re seeing it with this push for the Green New Deal through the coronavirus packages,” he added.

Free Speech’s call for censorship in the name of the public interest has been echoed by FCC Democrat Commissioner Jessica Rosenworcel. Rosenworcel wanted to censor e-cigarette ads in 2019.

Carr said that Americans should fight against censorship irrespective of its political leanings.

“My record is clear that I’ve spoken about left, right, and nonpolitical. It’s interesting that people find their First Amendment footing when it fits their political views. And when it doesn’t, it’s crickets,” he added.