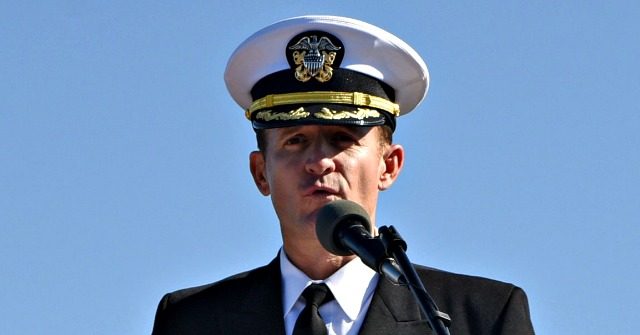 President Donald Trump said Saturday he backed the Navy’s decision to fire the commander of the aircraft carrier USS Theodore Roosevelt, Capt. Brett Crozier, “one hundred percent,” noting that the captain made a mistake when he stopped the ship in Vietnam for a port visit.

“I don’t know much about it, I can only tell you this,” Trump began. “Here we have one of the greatest ships in the world — nuclear aircraft carrier, incredible ship with thousands and thousands of people, and you had about 120 that were infected.”

Now, well I guess the captain stopped in Vietnam, people got off in Vietnam — perhaps you don’t do that in the middle of a pandemic or something that looked like it was going to be. History would say you don’t necessarily stop and let your sailors get off, number one.

Trump said he did not fire Capt. Brett Crozier. He said:

I didn’t make the decision. The secretary of defense was involved, a lot of people were involved, I thought it was terrible what he did, to write a letter, I mean, this isn’t a class on literature, this is a captain of a massive ship that’s nuclear powered. And he shouldn’t be talking that way in a letter, he could call and ask and suggest. But he stopped in Vietnam, a lot of people got off the boat, they came back and they had infection. And I thought it was inappropriate for the captain of a ship to do … I agree with their decision 100 percent.

Acting Navy Secretary Thomas Modly announced on Thursday he was firing Crozier, after a memo he wrote to his superiors was leaked to his hometown paper San Francisco Chronicle.

The memo warned that an outbreak of coronavirus on the ship — which the Navy was already scrambling to address — threatened sailors’ lives because not enough sailors were being let off the ship fast enough in Guam, where they were docked.

Crozier warned that sailors’ lives were at stake. When he left the ship early Friday morning, videos emerged from crew showing them clapping and chanting, “Captain Crozier.”

Modly said that Crozier did not share his concerns with his direct superior — who was on the ship — or him personally before sending the email via an unsecured and unclassified system, which assured its leak.

Since Crozier’s firing, the left and some on the right have hailed him as a hero who was punished for speaking out in an attempt to save sailors lives.

Modly has said Crozier was not fired for raising concerns, but for doing it in a way that it would become public, which he said panicked sailors’ families and signaled to adversaries that the ship was vulnerable.