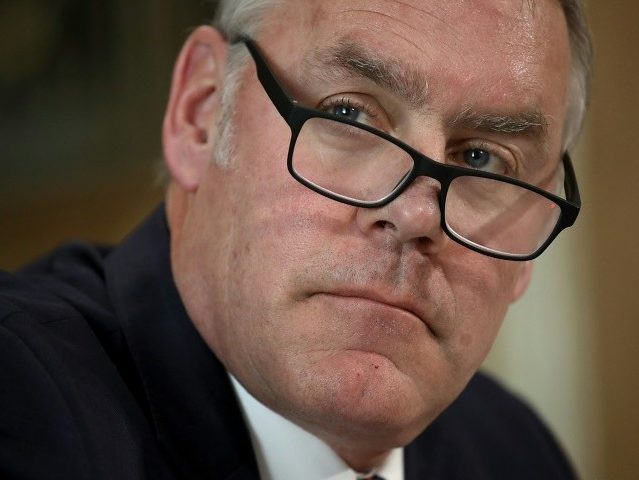 “I think Biden is just trying to be relevant on any issue at this point. So I think he should not have taken his staff’s direction on this,” Zinke told Breitbart News in an exclusive interview Friday.

His actions were wrong. … Looked like he was well-liked, fine. I hope he was. I hope he was. But you know, it’s a swing and a miss for Biden and the other political pundits that try to find wrongdoing in every corner and the wrongdoing in this case was the loss of confidence in the commanding officer that broke the chain of command. It doesn’t get much simpler than that.

Biden first weighed in on Crozier’s firing on Friday, trying to tie it to President Trump, as pundits on the left shared videos of the crew cheering the captain as he walked off the ship.

Captain Crozier was faithful to his duty—both to his sailors and his country. Navy leadership sent a chilling message about speaking truth to power. The poor judgment here belongs to the Trump Admin, not a courageous officer trying to protect his sailors. pic.twitter.com/AkGFdlYjwt

Navy Secretary Thomas Modly fired Crozier on Thursday after he wrote an alarming memo about the spread of coronavirus on his ship that leaked to the San Francisco Chronicle a day later. Modly said the captain did not raise the issue with his superior, who lived down the hall on the ship, or try to alert Modly personally before sending the memo over unsecured and unclassified lines, which ensured its leak.

Zinke said it is “black and white” that Crozier violated the chain of command.

“To me, it’s black and white. He violated the chain of command. And his state room is a few doors down away from the admiral’s,” he said, referring to Crozier’s boss Rear Adm. Stuart Baker, the carrier strike group commander.

“In the military, there’s a chain of command and it means something,” said Zinke, who has commanded special operations forces during war on multiple tours. “The military is an organization that depends on orders being issued by competent authorities and execution of the orders.”

“When a person joins the military, you give an oath of office to defend the constitution against all enemies foreign and domestic and obey the orders of the officers appointed above you. That’s a fundamental part of the military,” he added. “I don’t know whether that Captain made an honest mistake or had other intent behind it, but he was wrong in going outside the chain of command on an issue.”

Crozier also exposed the vulnerability of military capability where utmost secrecy is the rule, according to Zinke.

He said, “Obviously a carrier is a man-of-war. … From a Navy perspective and a national defense perspective a carrier battle group is a cornerstone of our defense, of our forward presence and power. If that forward presence and power is diminished by an article, is diminished by a capability, either perceived or not, it has strategic implications. In the case of the captain, the comment on an unsecured line on a virus aboard the ship, and to promulgate that on open channels, that’s where the problem lies.

“If our enemies know that … that’s a big signal that the United States … it means that that carrier battle group is diminished in its capability. That is not an unclassified letter-to-the-editor. There are war plans, there are top secret missions that carrier is carried out to do, and to advertise a diminished capability in a letter to the editor is blatantly wrong, he said.

“It goes back to World War II. Loose lips sink ships. That’s why you have a chain of command and that’s why the Navy is so careful about internet, about crew members communicating unchecked, about their opinions to the press, to communicating classified information,” he continued.

Zinke said he stands by Modly’s decision, and dismissed criticism from Biden and political pundits.

“I’ll stand by his decision. The political pundits they’re grasping as it looks to me like Joe Biden is grasping as well just to try to stay relevant, and any shot they can somehow manipulate to hurt this administration,” he said.

“It infuriates the Democrats that they didn’t get him on Russia collusion, they tried impeachment over Ukraine, and now they’re trying to get him on a Chinese virus,” he said.