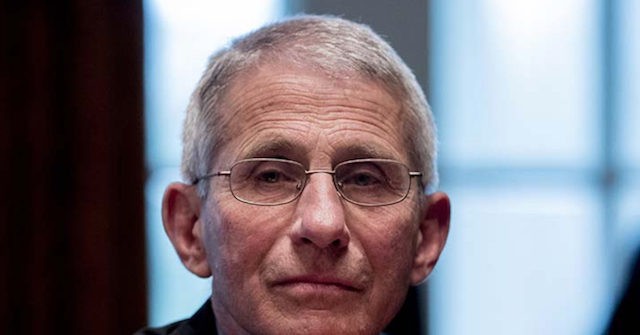 Sunday on CBS’s “Face the Nation,” National Institute of Allergy and Infectious Diseases director Anthony Fauci said that it would be “false” to say the federal government had the coronavirus pandemic under control.

BRENNAN: We heard from the president that there will be a lot of death in the coming weeks. Dr. Birx said it’s not the time to go to the grocery store or the pharmacy. What should Americans be preparing for?

FAUCI: Well, this is going to be a bad week. Margaret, unfortunately, if you look at the projection of the curves, of the kinetics of the curves, we’re going to continue to see an escalation. Also, we should hope that within a week, maybe a little bit more, we’ll start to see a flattening out of the curve and coming down. The mitigation that we’re talking about that you just mentioned is absolutely key to the success of that. So on the one hand, things are going to get bad and we need to be prepared for that. It is going to be shocking to some. It certainly is- is really disturbing to see that. But that’s what’s going to happen before it turns around. So we’ll just buckle down, continue to mitigate, continue to do the physical separation because we got to get through this week that’s coming up because it is going to be a bad week.

BRENNAN: Are you saying, Doctor, that despite the deaths that we may see, that mitigation is working and that you do have this outbreak–

FAUCI: I will not say we have it under control, Margaret, That would be a false statement. We are struggling to get it under control, and that’s the issue that’s at hand right now. The thing that’s important is that what you see is increases in new cases, which then start to flatten out. But the end result of that, you don’t see for days if not weeks down the pike, because as the- as the cases go down, then you get less hospitalizations, less intensive care, and less death. So even though you’re getting a- really improvement in that the number of new cases is starting to flatten, the deaths will lag by, you know, one or two weeks or more. So we need to be prepared that even though it’s clear that mitigation is working, we’re still going to see that tail off of deaths. So the first thing we want to look for is to see on a daily basis: are the number of new cases starting to stabilize? We’ve seen that in Italy. You just mentioned that correctly. We’re going to hopefully be seeing that in New York very soon. And that’s the first sign of that plateau and coming down.