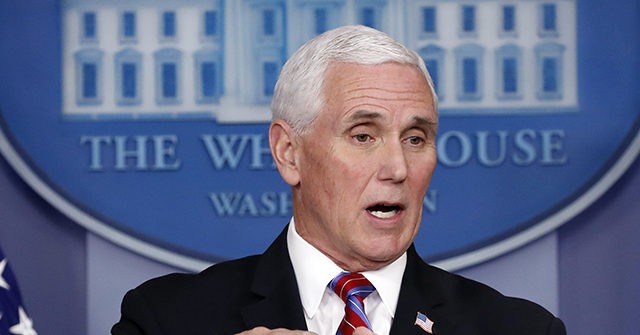 NORCROSS, Georgia — Vice President Mike Pence told Breitbart News exclusively that former Vice President Joe Biden’s comments on Friday morning were “offensive and racist” and that they are a sign of “desperation” on the part of Democrats fearful of losing black voters in November.

“It was offensive and racist and he should apologize to the more than 1.3 million Americans that supported President Trump in 2016 just for starters,” Pence told Breitbart News in an exclusive interview at Waffle House corporate headquarters. “I can’t say any more about it. I just was—I was taken aback.”

Earlier on Friday, during an appearance on The Breakfast Club with Charlamagne Tha God, Biden said that if any black Americans are unsure of whom to support between himself and Trump in November, “then you ain’t black.”

The controversial comments have drawn swift blowback against Biden from across the political spectrum, and his campaign spokeswoman originally tried to brush off the comments as having been “in jest.” But later, Biden himself said he did not mean to be “so cavalier” in his comments.

“I should not have been so cavalier,” Biden said later on Friday. “I’ve never, never, ever taken the African American community for granted.”

The last time a major Democrat presidential candidate insulted huge swaths of America was when 2016 Democrat nominee Hillary Rodham Clinton attacked supporters of President Trump as a basket of “deplorables.” Asked about that comparison here, Pence told Breitbart News that he again considers what Biden said to be “racist and offensive” and added it “demeans” all black Americans nationwide, no matter their politics.

“It’s—I just can’t say more clearly. It was a racist and offensive comment,” Pence said in the interview backstage after an appearance at a roundtable on reopening America alongside Waffle House’s CEO, other business leaders, and Georgia Gov. Brian Kemp. “But it also, really, it literally demeans African Americans all across the country, whatever their politics.”

Pence said the contrast for all voters between Biden and Trump could not be clearer.

“One of the things President Trump made clear on election night was that he intended to be the president of all of the American people, and over the course of the last three and a half years we worked our hearts out to improve the lives of every American,” Pence told Breitbart News. “I know how proud the president is about what we’ve been able to do for minorities and in particular African Americans. This is a president who passed opportunity zones and now there’s thousands of opportunity zones in communities around the country where we see investment coming. Before this coronavirus pandemic, we had the lowest unemployment ever recorded for African Americans in this country. It was President Trump who passed criminal justice reform that past administrations were not able to accomplish, but he sensed that our criminal justice system needed to be changed in a way in that there was a particular burden being placed on African Americans. We enlisted broad bipartisan support for the president’s leadership. I think it’s a reason why you see more and more African Americans supporting this administration, supporting the president’s re-election.”

Pence concluded  by noting that he senses “desperation” in Biden’s comments, as he thinks Democrats fear losing black voters to Trump in November due to all of the successes he laid out and more.

“I can’t help but feel there was some desperation in the vice president’s comments, because I expect Democrats are starting to sense that because of the president’s leadership and because of the way he’s been a champion for all Americans, including African Americans, that we’re drawing more and more people to our side,” Pence said.

This is the first part of a more-than-20-minute interview Pence gave to Breitbart News. More is forthcoming. The full interview will also air on Breitbart News Saturday on SiriusXM 125 the Patriot Channel on Saturday morning.