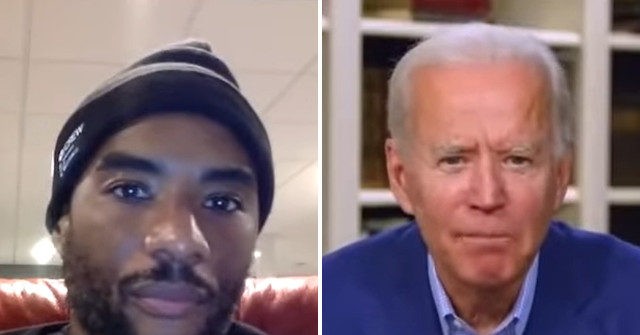 Former Vice President Joe Biden (D) declared Friday morning that if black Americans are unsure whether to support him over President Donald Trump in the November election, “then you ain’t black.”

Biden made the unsolicited racially-charged remark as he departed his virtual interview with Breakfast Club co-host Charlamagne tha God.

“If you have a problem figuring out whether you’re for me or Trump, then you ain’t black,” Biden told Charlamagne, not in response to any question, but to the host’s statement: “It’s a long way until November, we’ve got more questions.”

“It don’t have nothing to do with Trump, it has to do with the fact — I want something for my community,” the radio host shot back.

“Imagine if Donald Trump said this,” he then asked.

Retweet if you think this sounds racist AF!!!

Biden’s comment received further blowback from other political and media figures from across the media spectrum:

Whoever helped Biden with this particular interview flopped.

“You ain’t black” will never bang coming from a white man’s mouth. Soz.

I know your forefathers decided on the racial categories but you really have a nerve whether in jest or not.

This, ladies and gentlemen, is why they very rarely let Joe Biden do anything that isn’t completely controlled and scripted.

Sometimes he accidentally says what he thinks.

Like how he, a 77-year-old white man, should be the arbiter of how Black people should act. https://t.co/JuYMGBfvuk

Wow. This is one of the most condescending interviews I’ve seen. Early on the interview @cthagod asks Biden about Blacks feeling Democrats take their votes for granted and it ends with Biden shouting about how if Blacks don’t vote for him they “ain’t black” https://t.co/XRDP6gb4sH

Listen to the audio.@JoeBiden: “If you have a problem figuring out whether you’re for me or Trump, then you ain’t Black.”

Biden thinks he can dictate what makes people Black or not. https://t.co/aRBRPQcGXA

Joe Biden looked a black man in the eyes today & said that he didn’t need to worry about black media because of a black person has to decide between voting Biden or Trump then they aren’t black.

This is the most racist thing I’ve ever heard out of a Presidential candidate.

If @realDonaldTrump said this there would be riots in the street. I held picket signs and protested segregation, while Joe Biden fought for it. I will proudly support Trump, let’s see him tell me to my face I’m not black.

Wow… Basically, Biden telling black people who don’t yet support him you aren’t black… instead of campaigning harder and pledging more to earn their vote https://t.co/fvVAWyKteL

“If You Have A Problem Figuring Out Whether You’re For Me Or Trump, Then You Ain’t Black” Joe Biden in 2020

This type of bigoted is so low it needs to stay quarantined in a basement like @JoeBiden! #BlackVoicesforTrump #BeBest pic.twitter.com/jHwTkPzbg9

Biden: “If You Have A Problem Figuring Out Whether You’re For Me Or Trump, Then You Ain’t Black”https://t.co/ISag9C7o0f

After @cthagod makes the excellent point that “Black people saved your political life in the primaries this year” and would like a Black woman VP, Biden’s team cuts off the interview and @JoeBiden starts yelling about his record, ending with this inappropriate line. Just gross. https://t.co/KlN1mZYigW

Biden: “If you have a problem figuring out whether you’re for me or Trump, then you ain’t black.”

It wasn’t just Joe Biden telling us when or not we are black enough..

It was his abhorrent blanket statements about black people

How insanely offensive that interview was

Earlier in the interview, Charlamagne pressed Biden over his record on racial issues and whether he is considering an African-American woman as his vice-presidential pick.

Charlamagne has previously criticized Biden, taking aim at the presumptive Democrat nominee for not appearing on his show during the Democrat primary race. Asked in March why Biden has avoided his program, Charlamagne told MSNBC:  “I have no idea,” before adding: “It goes back to what I said: Joe Biden owes black people his political life. You know what I’m saying? So don’t disrespect that base by not showing up, especially when, you know, all your other former opponents did.”

“Black people saved his life the past couple of weeks,” he added of Biden’s primary election victory in South Carolina on March 1. “His campaign would be dead if it wasn’t for our O.G. Jim Clyburn in South Carolina endorsing him, and all those black voters in the South going out and voting for him. Plus, you were the vice president for the first black president. You, in particular, definitely need a black agenda.”

In September, Charlamagne called out Biden for offering to send a campaign surrogate instead of sitting down for an interview with the radio host, saying the move by the candidate demonstrates “white entitlement and privilege.”

“Joe Biden has offered to send his surrogate, so that tells me a lot about what Joe Biden thinks about our audience. I think Joe Biden might be suffering from that same white entitlement and privilege and ego where he’s just that old school white male who feels like ‘hey man, they need me, I don’t need them or I’ve got them already.’ That’s not respect,” he lamented in an interview with CNN.